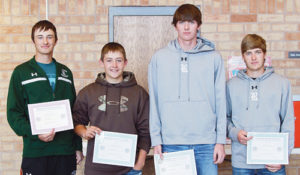 Four Rangely High School Panther baseball players were honored by the Western Slope League for their play this season.

Rangely sophomore Kaulan Brady was honorably mentioned, while sophomore Jesse Powell, senior Cameron Enterline and junior Kelton Elam were named to the first team, All-Conference team. Rangely head coach Paul Fortunato commented on each of his players honored by the league. “Kaulan ate up the most innings on the mound and will be solid next year,” Fortunato said of the sophomore. “Jessy had a great year catching and had more timely hits than anyone. Cameron has been a great leader for me in both football and baseball and he will be greatly missed. Kelton had a great year and was the most consistent all year.”

The Rangely Panthers baseball team (7-7) is currently on a seven game win streak with wins over Unitah, Rifle, a doubleheader against Meeker and win against Grand Valley.

RANGELY I Rangely High School standout senior Kacey Denny has been asked to play in the Colorado 2A all-state baseball game to be held today at Machebeuf High School in Denver, Colo.

RANGELY I The two Rio Blanco County baseball teams played two doubleheaders during the regular season and played a single elimination game Saturday to determine which team would advance in the district tournament.