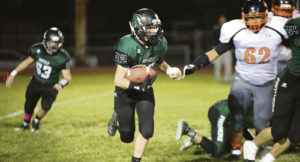 RANGELY I The Rangely High School football team lost its Homecoming game 34-14 to the Hayden Tigers last Friday on Yaeger Field and this Friday the Panthers will host West Grand.
Rangely head coach Paul Fortunato stayed positive after another tough loss for his team.

“I do love these kids and they are working very hard,” coach Fortunato said. “It’s been rough but I think they have more in them.”
The Panthers allowed two touchdowns in the first have and trailed 14-0 at halftime and although they scored two touchdowns in the second half, the Tigers scored three more times to put the game away.
Panther senior Mikey Sheppard carried the ball 16 times for 68 yards and he scored both of Rangely’s touchdowns. Freshman running back Tytus Coombs carried the ball 18 times and he was one yard short of recording a 100-yard game.
Sophomore quarterback Drew Brannan completed four of 18 passes for 58 yards, including two to Sheppard, one to AJ Lujan for 38 yards and another to Trenton Files.
Rangely sophomore Grady Nielson led the team on defense with 13 tackles, while Stetson Cudo finished with six, including one sack and a fumble recovery and Tristan Moore was in on nine tackles.
The Panthers are currently 2-4 overall and 0-2 in league games. The West Grand Mustangs will come to Rangely with an overall 5-1 record and 2-0 in the league.
The kickoff is scheduled for 7 p.m.

RANGELY — The Panthers struggled again this week against the Hayden Tigers. Hayden defended its homecoming with a 47-7 win over Rangely. Hayden scored on three passes and four runs.