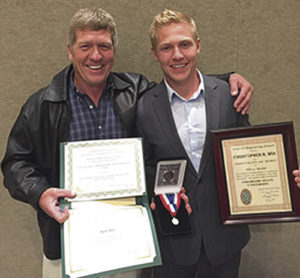 MEEKER I Since 1927, the American Council of Engineering Companies of Colorado (ACEC) has bestowed the Medal of Award, also known as the Silver Medal, to one deserving student each year, and this year it was presented to a former Meeker student.

The ACEC Silver Medal is presented to the engineering student who has excelled academically, demonstrated an all-around ability in several areas and shows great promise for the future. This year’s winner is Ryan Wix, a senior set to graduate with his degree in mechanical engineering.
Originally from Meeker, Colo., Wix attended two other schools before finding his home at CSU’s College of Engineering. Initially interested in aerospace engineering, Wix eventually took a liking to the study of energy, and ultimately chose to major in mechanical engineering.
Wix is grateful to have received recognition for his hard work and dedication at CSU.
“I feel extremely humbled by receiving the Silver Medal. I’ve been exposed to lots of other phenomenal and bright students here at CSU who are equally deserving of this award, and I’m honored to represent such a great cohort of fellow students.”
After graduation, Wix plans to work as an engineer in training for Siemens in Orlando, Fla., for a year before hopefully moving back to Colorado to continue his career as a field service engineer.
Wix graduates on May 13.

Gabrielle Goettel gets degree from Whitworth

Meeker girl has life-changing experience on trip to Peru

Listen to this post MEEKER I Meeker resident Aubrey Walsh, a 2012 graduate of Meeker High School and currently a senior at the University of Northern Colorado (UNC) in Greeley, spoke recently about her her […]

Listen to this post MEEKER I Taylor Neilson of Meeker, a student now at Oklahoma State University, was honored by OSU at the recent College of Agricultural Sciences and Natural Resources Scholarships and Awards Banquet.