RBC I With a struggling economy, severe drought and fires, and one of the most contentious national elections in memory, 2012 wasn’t an easy year. Residents of Rio Blanco County, Rangely and Meeker came together in times of celebration and sorrow to support one another and the continued growth and development of their respective communities. 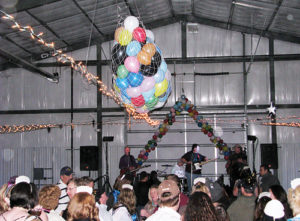 January ~ June, 2012
• “We were very happy with the first annual New Year’s Eve party,” Range Call president Suzan Pelloni said of the party, which was open to all ages. “All ages had a really nice time. The party featured live music from Straight Shot, snacks, a photo booth, the Lions Club ran a cash bar and a Tipsy Taxi was provided by the James Sizemore Memorial Fund, benefiting the Rio Blanco County Search and Rescue. Pelloni said the Range Call committee is planning something for mid-spring of this year.
• She was the face of Meeker’s Farm Bureau insurance agency for more than 13 years and worked at the Colescott Agency for five years before that. All together, January 2012 marks Elaine Ellis’ 50th year in the insurance industry and, she has decided, a good place to stop. She’ll retire at the end of December.
Anyone who spends half a century in one industry must love their work. For Ellis, helping people and “giving them options instead of a stamp on their previous coverage” has been the best part of her job. “I would like to thank all of my clients for their patronage and friendship over the years. I will miss each and every one. May the Lord bless all of you,” she said.
• Author Sandy Munro held a book signing at Wendll’s Wondrous Things in Meeker for his book “Finding Uri,” about the father he never knew.
• Rio Blanco County entities received $59,851 in Colorado Department of Local Affairs (DOLA) Conservation Trust Fund (CTF) payments in 2001. The CTF is one of three funds from the net proceeds of the Colorado Lottery. The department distributes CTF dollars quarterly on a per capita basis. Funds can be spent on projects that involve the acquisition, development, and maintenance of new conservation sites and for capital improvements and maintenance for recreational purposes on public sites.
• The Meeker High School class of 1966 held its 45th class reunion over the weekend of June 4, 2011. Events included meals, the Old Timers’ dinner and dance, touring a friend’s ranch and visiting and enjoying each others’ company. Those attending but not in the picture include Joan McGruder Bates, Josie Pattee Kemry and Lois Kincher Williams. Also attending with spouses were Mary Hartwig, Bill Bunch, Daryl LeFevre, Floyd White, Bill Stick, Bill Lake, Mark Cose, Jim Whalin, Dale Ayars, Susan Berthelson, Sandra Warren, Harold Bates and Ben Williams. We graduated with 46 but counted 13 more that wanted to be in Meeker as part of the class. We have lost 12 friends to death: Shariann Arnold Adams, Mike McCrary, Richard Coleman, Rick Griffin, Suzanne Martin Hiigel, Joan Stephenson, Caroline Wright Lantz, Lawrence Klinglesmith, Kenneth Slaugh, Alan Simillion, Jack Davis and Tom Goodrich. They are missed.
• As of January 2012, the Town of Meeker was officially debt-free. The town made its final payment on a debt incurred in the 1970s for the town’s water system.
• Shawn Bolton was elected chairman of the Rio Blanco County Board of County Commissioners at its first meeting of 2012. “I want to see a better working relationship between the county and all residents and taxpayers of the county,” Bolton said after the meeting. “There is always room for improvement.”
• The Rio Blanco Historical Society met for their first general membership quarterly meeting. The meeting was followed with a presentation by Bob Silbernagal on the topic of his newly-published book entitled “Troubled Trails” about the Meeker Massacre and the events that followed.
• The steel is going up on the new Rangely District Hospital and the nice weather is helping the construction progress. “They are estimating that the steel frame will be completed by the end of February already,” Nick Goshe, CEO of RDH. “The schedule is progressing very nicely and is certainly helped by a very mild winter so far. We are planning on having a topping on the steel towards the end of February and are planning on opening this up to the public to see progress on the project.”

• Rio Blanco County became a stopping point last week for the Road to Discovery ride and the Sea to Shining Sea tour, two cross-country cycling events. While the causes were different and the participants […]

• A suspect placed in custody at the Rio Blanco County Jail was charged with robbing Mountain Valley Bank at Fourth and Main Streets in Meeker, according to the Meeker Police Department. The suspect was […]