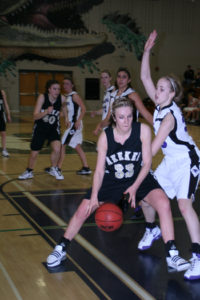 MEEKER I The mascot for Standley Lake High School in Denver is the “Gator” and its gymnasium, known as “The Swamp,” is where the basketball season for the Lady Cowboys came to an end last Friday.
Front Range Christian defeated Meeker 55-35 in the first round of the state-qualifying regional tournament.
“We went over and had to play the No. 1 seed from the Mile High League,” Meeker’s head coach Hallie Blunt said of the challenge facing her team, which finished fourth in the Northwest League.
“We came out kind of tight and they (Front Range Christian) were up 22-6 after the first,” Blunt said.
Meeker scored eight points and held Front Range Christian to nine but Meeker couldn’t keep up in the third.
“I thought maybe we settled down but they applied good guard pressure and we just struggled getting any offense going,” Blunt said.
Meeker senior Stacey Fitzgibbons led all scorers with 26 points, making 13 of 18 free throws and one three-pointer. Juniors Becca de Vergie and Sage Chapin each scored four points and Laura Glass added a free throw.
“We had a good season and I was really proud of our kids,” Blunt said of her team, which finished the season with a winning record of 13-9. “We got down but they kept fighting and never quit. The girls showed a lot of heart all season.”
Blunt also complimented her two varsity seniors, Fitzgibbons and Timbre Shriver.
“They are two great leaders, who led by example,” Blunt said. “They played all-out in games and in practice. They make it enjoyable and our team a lot better. They will be hard to replace.”
Blunt has already started looking to the future.
“I’m looking forward to next year, returning 10 kids with varsity experience, 10 freshmen and some great incoming freshmen, makes our future look good,” Blunt said. “Now we just need to go to work this summer.”

It’s been almost two years since Gene Scritchfield died. His memory, however, lives on. And it always will. As someone wrote to Gene’s wife, Ann Marie, after his death, “Gene’s presence will be felt in […]

Prescribed fires will burn near Meeker

MEEKER | Officials with the Upper Colorado River Interagency Fire Management Unit are planning prescribed fires this fall near Meeker to improve wildlife habitat and reduce build-up of vegetation that can fuel large wildfires.