MEEKER I Steve Allen shudders to think about how much worse Saturday night’s downtown fire could have been. 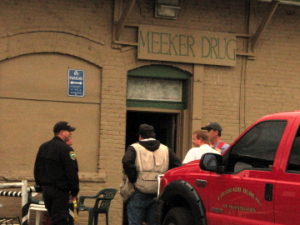 “That whole block is our worst nightmare,” said Allen, the Meeker fire chief, of the block on Main Street between Fifth and Sixth streets, which includes the historic Meeker Hotel. “Some of (the buildings) have a foot or two of separation, but the roofs are connected.”
Firefighters spent about four hours extinguishing a fire that started in the basement of the Meeker Drugstore.

Linda Blagg, owner of Meeker Drugstore, which was built in 1914, could not be reached for comment.
“There’s a lot of water damage and smoke damage, but it’s salvageable,” Allen said of the drugstore building.
Jerry Means, an investigator with the Colorado Bureau of Investigation was on the scene Monday, along with representatives from the Meeker fire and police departments.
“As far as evidence … it is still an undetermined cause as of now,” Allen said of the fire. “It could have been electrical … but it’s just one of those undetermined deals. You can’t rule it (arson) out, but there’s no evidence.”
Meeker Police Chief Bob Hervey said, “The fire at the drug store is being investigated by Officer Jim Amick, and he has received assistance from the CBI arson investigator. At this time it appears the fire was an accident, possibly an electrical shortage, but the case is still under investigation.”
Allen said the drugstore’s insurance company will do its own investigation.
First National Bank of the Rockies, located east of the drugstore, sustained smoke damage, but a crew spent the weekend and Monday’s Memorial Day holiday cleaning the bank’s offices, which were open for business Tuesday morning.
“We were back in business,” said Kim Brown, manager of FNBR. “Everything worked out. (The smoke) was really bad, but we had a disaster restoration service company on hand that worked hard through the holiday weekend on the cleanup of our facility. We’re still assessing the damage, but at the moment things look pretty good.”
The building that houses the bank was built in 1904.
“Had our fire alarm not gone off and warned authorities as early as it did, due to the building structures being so old and interconnected, there was a possibility the entire block could have gone up in flames,” Brown said.
The call from the bank’s alarm company was received at the Rio Blanco County Communication Center at 7:17 p.m. Saturday.
“The report came in (the fire) was in the bank, because that’s where the smoke was showing,” Allen said. “We did the initial attack through the bank and found nothing. Then we found (the fire) in the drugstore.
“The fire was coming out of the floor, up through the basement, in the back of the drugstore,” Allen continued. “We started knocking it down and cutting holes in the floor with a rescue chainsaw. Once we got it vented, it really wanted to go. Whichever way it can breathe, that’s the way it’s gonna go.
“That bothered us that it had to happen,” Allen said of smoke damage to the bank. “But we had to get to the fire, and it pushed the smoke in that direction. There was no water damage in the bank, just smoke. Those buildings were built so long ago, the only thing separating them is an old rock masonry wall. That’s how smoke was getting over to the bank, it was traveling over the floor joists and getting into the bank. There was no fire in the bank, just a lot of smoke. As soon as we started to put the fire out, it pushed the smoke and heat in a different direction.”
Allen said firefighters initially had trouble reaching the fire in the drugstore.
“It was hard to get to the fire,” Allen said. “It had been smoldering in the basement, probably for a long time. We’re just lucky that it was that heavy old construction timber. If that had been new construction, that would have burned clear up.”
About a dozen or so Meeker firefighters responded to the call. The Rifle Fire Department was also called as a precaution. There were no injuries.
“We called Rifle and had them come and standby for backup,” Allen said. “We didn’t really need ’em, but that block there … it’s our biggest nightmare. If something were to blow up in our face, we wanted more resources.”
Both the Meeker Cafe and Meeker Hotel — located west of the drugstore — were open for business Tuesday, after being closed for the weekend.
“You know, it’s just a little smoky,” said Avis Loshbaugh, who manages the Meeker Cafe. “I think we’ll be OK. We hope (the smoke smell) won’t linger or come back. It’s in the basement more than anything. But we opened it up and aired it out and had fans in there.”
Rhonda Porterfield, who manages the Meeker Hotel, said, “It really stunk things up for a while. We were closed for the weekend, but we opened back up (Tuesday). It was worse in the cafe, but it came over to the hotel, too. We just opened things up and used fans (to get rid of the smoke).”

Still dancing after all these years

MEEKER I The saying might be “dance like nobody’s watching,” but in the Richardsons’ case, lots of folks have been watching. Lifelong square dancers Wilbur and Lois Richardson were inducted into the Colorado West Area […]

MEEKER I Danny Campbell was a resident of Meeker from 1958 until 1991.