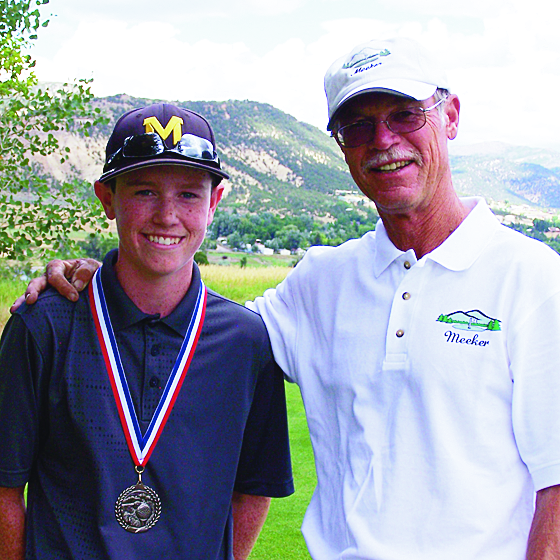 MEEKER | Rifle’s Kyler Smith, who recently turned 18, returned to the Meeker Golf Course for a second time in the past two weeks and left each time as the best golfer of the tournament.
Two weeks ago, Smith became the youngest golfer to win the competitive Lischke Memorial Golf Tournament at Meeker, and he returned Monday to play in the Meeker Junior Tournament, which he won for the sixth time in a row, shooting a three-over par 71.
Meeker’s Nick Burri, who will be a sophomore this year at Meeker High School, recorded his best-ever score of 78 to finish second in the 15-18 division.
“Nick played the round of his life,” local golf pro Jim Cook said. “He’s worked hard and practiced a lot this summer.”
Burri finished with eight pars and said he “played with the same ball the whole game.”
Burri’s score should give him confidence as he starts his second year of high school golf on the Rangely High School team since Meeker High School does not have a team. Burri said high school practice starts Monday and he will play in his first tournament Aug. 8.
Smith’s younger brother, Jacob, won the 13-14 division while Meeker’s Logan Hughes was second and Tel Blanke was third.
Smith’s sister, Maci, won the girls’10-12 division and Meeker’s Addy Joy was second. Braydon Garcia had the best score (53) in the boys’ 10-12 division after nine holes and Elijah Deming was second. Phillip Arnold finished third and Ryan Phelan was fourth.
Liam Demin had the best score (32) after five holes were played in the 7-9 division, and Jonathan Fitzgibbons finished as runner-up.
Cook said he was “impressed” with the Garcia siblings, who all won their age groups.
Brealyn Garcia won the girls 7-9 division and Karly Orris was second. Taylor Garcia and Sarah Welle tied for first in the six-and under girls’ division and Hailey Asselin was third. Weston Sanders won the boys’ six-and under and Alex Garcia was second.
The tournament also featured two novice divisions, 7-9 and 10-12, which were won by Elliot Steinacher and Dax Sheridan respectively.
The next tournament at the Meeker Golf Course will be the Pioneers Hospital Benefit tournament Aug. 9.

I am writing this in response to the town hall article and Mr. Halstead’s comments last week. First, I would like to say to Mr. Halstead, thank you! It is such a relief to hear […]

Money and banking are serious business. But for Todd Young, he can see humor, even in the financial world. “I was co-president of my banking school class at CU (Colorado University) and both of us […]

Board to interview superintendent finalists

RANGELY — School board members are moving forward on finding a replacement for Superintendent Dwayne Newman.