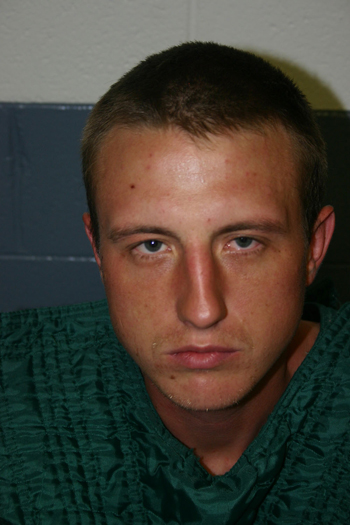 RANGELY I Jerry Snider Jr., charged with killing his father over the Fourth of July weekend, pleaded not guilty by reason of insanity Friday in district court.
Tina Fang, who heads up the public defenders’ office in Glenwood Springs, issued the plea on Snider’s behalf during Friday’s hearing at the Rio Blanco County Courthouse.
“I will accept that plea,” said the presiding judge, Gail Nichols.
As with his previous appearances, the courtroom was cleared Friday and only family members and the media attended, after going through a security check. There were four uniformed, armed sheriff’s deputies present during Snider’s hearing.
Eight family members were in attendance Friday, along with the Rio Blanco County Sheriff’s investigator. Snider, seated at a table near the front of the courtroom, facing the judge, turned and glanced back at family members on several occasions. His face showed no expression.
After the hearing, a member of the Snider family, who asked not to be identified, said the family had no comment at this time.
“No, not right now,” he said. “Probably not until toward the end. I’m glad you’re here, but I know that they don’t (want to talk to the media). At this point, we don’t have anything to say. The family isn’t ready to talk at this point. We’re not ready for that. This will be a long, drawn-out process. The family, this is rough on them. It’s a horrible thing.”
Snider Jr., 29 at the time of his arrest, is charged with first-degree murder. He allegedly killed his father, 50-year-old Jerry Snider, whose body was found July 3 in the living room of his home in Rangely. A hatchet with apparent bloodstains was found during a search of the elder Snider’s home, according to the arrest warrant.
Snider Jr. was ordered by the court to the Colorado Mental Health Institute in Pueblo for a psychiatric evaluation.
“I will make a referral to Pueblo,” Judge Nichols said.
Martin Beeson, district attorney for the 9th Judicial District, which includes Rio Blanco County, asked for Snider Jr. to be evaluated for insanity, as well as competency to stand trial.
“That will kill two birds with one stone,” Beeson said.
Snider Jr.’s attorney Fang said she did not object to Beeson’s request.
“I think they will do that anyway,” she said.
Before Fang entered the insanity plea on Snider Jr.’s behalf, the judge addressed the defendant.
“I want to make sure you understand the consequences,” Nichols said. “This is a special plea. There won’t be a separate trial to determine if you’re insane, then a separate trial to determine if you’re guilty.”
Nichols said the psychiatric evaluation “will take several months, at least three. … I will not set a time for trial until the exam is complete and the report received.”
The judge cautioned Snider Jr. if he was not cooperative with the psychiatrist that mental health officials could “use such drugs as medically appropriate” and he may be administered a polygraph test.
Snider Jr.’s attorney Fang asked for a definition of cooperation.
“If he refuses not to take a polygraph, would it be deemed as uncooperative?” Fang said.
Earlier in the day’s proceedings, she also addressed the judge about other concerns.
“There is no court reporter,” Fang said. “On a case like this, we should have one present … to make sure there is an accurate record of the proceedings. I would ask that the case be prioritized for a court reporter. I know that would put a strain on folks, but it’s important to have a record of the proceedings.”
Judge Nichols replied, “We will have to live with (audio) recording today. We do not have a court reporter and we will go forward.”
Fang said, “I would object to going forward without a court reporter … since this is a first-degree murder case.”
However, the case will move forward, as Nichols, after conferring with both attorneys, scheduled Snider Jr.’s next court date for Jan. 22, 2010.
“Judge (Daniel) Petre will pick up in January,” said Nichols, whose rotation in Rio Blanco County will conclude at the end of the year.

RANGELY I Individually, the Panthers wrestled well, with seven placers at last Saturday’s tournament in Meeker. Team-wise, though, Rangely didn’t have the numbers, which has been the case all season.

See you at Septemberfest, it’ll be great!

RANGELY I Things have been kind of crazy lately for the staff of Western Rio Blanco Metropolitan Recreation and Park District. Moving will do that to you.

Rangely | A cribbage tournament, sponsored by Silver Sage RV Park, will be held March 19 at the Elks 1907 BPOE, at 1 p.m.