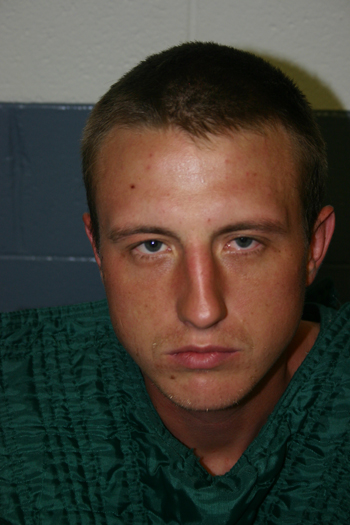 RANGELY I For the first time since his arrest on charges of murdering his father, Jerry Snider Jr. came face to face with family members Friday during his initial court appearance.
The 29-year-old Snider Jr. made eye contact several times with the six family members seated in the courtroom, but showed no expression. He looked at family members as he was led into the courtroom through a back-door entrance and again as he stood to be escorted out of the courtroom. While seated at the defendant’s table during the hearing, he turned and looked back at family members on a least a couple of occasions.
Snider Jr.’s hearing, which lasted about 30 minutes, was held at the conclusion of the other criminal cases on the docket. Extra security measures were taken as the courtroom was cleared out and searched prior to Snider Jr.’s appearance, and only family members and the media were allowed back in after going through a security check. Five armed officers were present in the courtroom.
A request by the Herald Times to take photos of Snider Jr. in the courtroom and to audiotape the proceedings was denied by Judge Daniel Petre. Petre was filling in for Judge Gail Nichols, who has been assigned to the Snider case, but had a scheduling conflict with Friday’s hearing because of a jury trial.
Martin Beeson, district attorney for the 9th Judicial District, which includes Rio Blanco County, withdrew a previous motion to seal the records in the case.
Snider Jr. is charged with first-degree murder in the death of his father, Jerry Snider Sr., 50, whose body was found July 3 in the living room of his home at 134 Darius Ave. in Rangely. Blunt trauma injury was listed as the cause of death. A hatchet with apparent bloodstains was found during a search of the elder Snider’s house, according to the arrest warrant.
At Friday’s hearing, Snider Jr. was represented by Jim Conway of the Regional Public Defenders Office in Glenwood Springs.
Snider Jr. waived the reading of charges. His attorney advised him of the charges against him and reviewed the sentencing guidelines, which could carry a maximum sentence of life in prison with no parole.
“But I’ll die there?” Snider Jr. was overheard to ask.
The death penalty is a possibility in a first-degree murder case, but it remains to be seen if the prosecution makes that request.
It also remains to be seen if the case will go to trial.
“I just don’t know where this will go,” said Sgt. Roy Kinney, Rio Blanco County Sheriff’s investigator. “It’s too early in the case to anticipate where it will go, and what either side will do, prosecution or defense.”
The investigation work in the case is mostly completed.
“There’s one person we know we’re trying to get in touch with,” Kinney said. “But everything is pretty much completed, unless something new pops up. Everything is going to be in the courts from here.”
Kinney met with family members at the conclusion of Friday’s hearing.
“They are still in shock,” he said.
There was no modification of bond Friday. The case is currently set for no bail.
“It is presumed to be a no bail offense,” said Jeff Cheney of the 9th Judicial District Attorney’s Office. “My understanding is the defendant does not wish to raise bond as an issue.”
Snider Jr.’s attorney expressed concern about “destructive testing” of hair, saliva and tissue samples taken from his client.
“Identity does not seem to be an issue in this case,” public defender Conway said. “We’re concerned about destructive testing … until the defense has an opportunity to review discovery.”
Cheney, of the district attorney’s office, asked the prosecution be allowed to move forward without delay because “it already takes a long time to get the criminal lab respond to a request for testing.”
“I don’t think granting a request to prohibit testing (of samples) that were seized validly, because they were seized pursuant to a court order … (the prosecution) may proceed with testing,” Judge Petre ruled. “But before any destructive testing is done, the defense must be present.”
The next court appearance for Snider Jr. is Sept. 11 and will follow the same security measures as were taken at Friday’s hearing in Meeker.
“I think what you’ve done today is a good precedent,” public defender Conway told the judge at the conclusion of the proceedings.
Snider Jr. continues to be held at the Rio Blanco County Detention Center.

RANGELY I This is homecoming week at Rangely, and today is color day. There will be a chili dinner at 5:30 p.m., followed by a bonfire at the new elementary school. Friday is spirit day, […]

My name is Peggy Rector. I have been in charge of ordering the food for Septemberfest for a number of years.