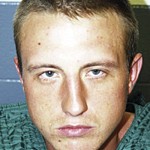 RBC I The jury will now decide the fate of Jerry Snider Jr., who is charged with first degree murder and aggravated robbery, in the death of his father, Jerry Snider Sr. The defendant has pleaded not guilty by reason of insanity.
Ninth Judicial District Attorney Martin Beeson, Jeff Cheney and Matt Barrett prosecuted the case claiming the defendant had a long history of drug and alcohol abuse. Prosecutors argued Snider Jr.’s mental condition at the time of the murder is attributed to voluntary ingestion of alcohol and withdrawal symptoms after a week-long drinking “bender” that ended two days before the murder July 2, 2009.
Snider Jr. was defended by public defenders Tina Fang and Tammy Brady, who argued he was a paranoid schizophrenic and had been for several years.
The prosecution rested its case Tuesday, in the trial that started with jury selection Jan. 4 and closing arguments were heard yesterday.
More than 50 witnesses testified during the trial, which started Jan. 12, after 16 jurors were chosen. Only 12 jurors will deliberate the case, which they started late Wednesday afternoon.
“There is a murderer in this room,” deputy District Attorney Jeff Cheney said in his closing arguments, pointing to the defendant.
Cheney used the defendant’s own words against him, arguing the defendant’s state of mind at the time of the murder.
“Before I even hit him, I tried to talk myself out of it. It’s wrong to kill,” Cheney said the defendant told psychiatrist Dr. Karen Fucatake, the expert witness for the defense and the only doctor to testify Snider Jr. was schizophrenic.
“He knew it was wrong,” Cheney said. “He was having a conversation with himself, seconds before he did it.”
Cheney pounded on the prosecution’s table nine times, the number of times Snider Jr. hit his father in the head with a hatchet, while he slept in his recliner. Snider Jr. then pulled his dad out of the recliner, took his wallet and truck keys and drove to Denver.
Fang said her client heard voices and on the day of the murder, the voices were coming from his father. He believed his father was going to kill him, if he didn’t defend himself and kill him first.
Barrett in his rebuttal said his actions of robbing his father and fleeing the scene were not consistent of self defense.
Several family members of the victim were present for closing arguments and one of the victim’s sisters sat in the courtroom for the entire trial.
Snider is not facing the death penalty.

RANGELY | Gage Prater, 9, is a third grader at Rangely’s Parkview Elementary School. A happy kid who enjoys school, loves to play football, wrestle, play with his friends, and ride his dirt bike, Gage’s […]