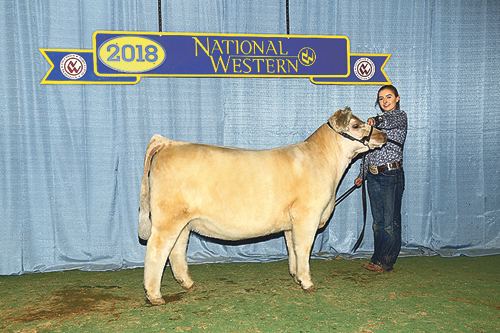 COURTESY PHOTOS
Kaden and Kolbi Franklin participated at the 2018 National Western Stock Show. (Top) Kaden was second in class and made it to the champion drive in Junior Showmanship.  He also was second in class in the junior market steer show with his steer, Max, and made the champion drive and the sale.  He sold his steer to Anadarko Oil Co. and Senator Jerry Sonnenberg.   Kaden showed in the prospect steer show and was fourth in class with his Hereford steer, Bob. (Bottom) Kolbi showed a prospect steer and heifer.  Her heifer, Sugar, was third in the breeding heifer show and her steer, Yogi, was seventh.  She was also asked to assist Kirk Steirwalt in a televised grooming clinic sponsored by Andis Clippers and Weaver Show Supplies.