RANGELY — Nearly 200 people attended last Saturday’s funeral service at the Rangely High School gymnasium for Austin Stoner, who died April 19 from an overdose at the age of 18.
Here are excerpts of remarks made during the service by his brother, Michael, and his stepmom, Dottie. 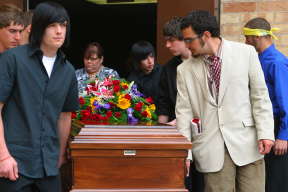 “At first the thought Austin is dead seemed just unreal to have actually happened … and now the whole thing is too real, more real than anyone wants it to be. How can we be left so helpless …? I wish there was something I could do to bring him back.
“But that’s not real life. What is real is left in Austin’s wake. Coping with the feelings he left us with will be hard. I know that I have to deal with not only … Austin has died, but also … what I imagined him to be when he would have grown up — a husband, a father, a grandfather, an uncle. He would have been the best uncle there ever was. I wish he would be there to spoil my kids rotten. I can hardly bear believing he’s gone.
“I never thought I’d have to experience his death as soon as this. He was only 18, almost 19, and full of life and dreams. He wasn’t before he went to boarding school. He barely started living life when he came back. He came back ready to live life the way he thought it should be … 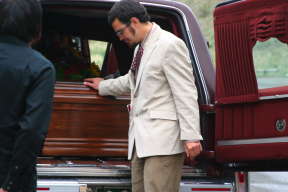 “He came back so appreciative of everything and an awakened life, like he had been in a hole covered in dirt all of his life and suddenly unburied to feel all there was to be offered.
“It’s not fair to us or him that he was cut as short as he was, especially since he would leave everyone he met with a smile on their face. But the times he had, he lived them like there was no tomorrow, until the end. Maybe it’s a lesson he lived for us to see. I’m sure the last thing he did was smile before he went to sleep.”
— Michael Stoner

* * * * *
“I know Austin made me laugh, and how he could laugh. Humorous, polite, helpful and good-hearted. He could carry on an intelligent conversation about almost any subject.
“When we came together as a family, we had some struggles. But, as a stepparent, all I wanted was to accept Austin and Michael, and for them to accept us. Every night I would pray, ‘Dear heavenly Father, please help us to be a family.’
“Recently, I’ve been told that Austin never liked me, and that is OK. I loved him and Michael as my own. There is a difference between being popular and being a parent.
“Austin and I lived together and worked together. They were some of the happiest days of my life. I don’t know what all he said about his job, but I know what I saw. … My prayers were answered and we were finally becoming close.
“When we overlook the problems, we aren’t doing anyone a favor. Please speak up, adults and kids alike. Please talk, be friends, and think about your actions. Love each other enough to stop these kinds of things from happening. I never would have imagined I would be attending Austin’s funeral before he would be attending mine.”
— Dottie Stoner

Listen to this post RANGELY I It is almost that time of year again when the Town of Rangely starts to beautify Main Street.