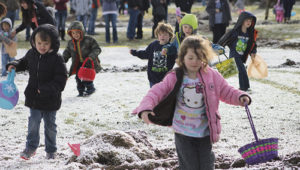 A little late in starting, but the kids didn’t care Saturday at Elks Park in Rangely during the annual Rangely Elks Club Easter Egg Hunt. Hundreds of kids were on hand, and they made fast work of finding the hundreds of Easter eggs set out for them as part of the Easter fun. 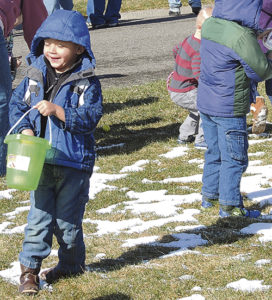 Children from one to 10 years searched the Barone Middle School lawn for Easter eggs on Saturday morning, and this young gent with his green bucket seemed pretty proud of his most recent acquisition. The Annual Meeker Easter Egg Hunt was sponsored by Meeker Lions Club with Meeker Fire and Rescue also present. Several hundred kids and their parents were present for the hunt, which began at 10 a.m. sharp and was over 30 seconds later. 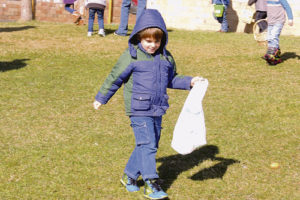 This young lady remained focused on the ground as she quickly walked around the grass in front of Barone Middle School in Meeker on Saturday morning as part of the Meeker Lions Club’s annual Easter Egg Hunt for kids ages one to 10 years. The young lady bagged her share of eggs, which contained candy or up to $1 in cash. 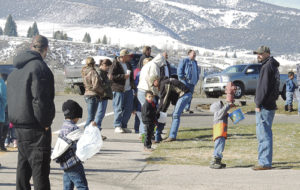 It was sunny and cold and perhaps a slightly smaller crowd than in past years, but hundreds of Meeker kids and their parents patiently waited until 10 a.m. sharp on Saturday for the beginning of the annual Meeker Easter Egg Hunt at Barone Middle School. At exactly 10 a.m., the horn on the Meeker Fire and Rescue truck sounded and the stampede was on, lasting roughly 30 seconds before all the eggs were in buckets instead of on the school lawn. 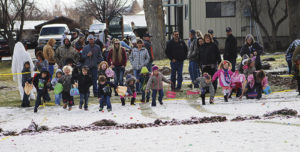 The kids were all nicely lined up waiting on the Rangely fire truck to sound its horn to start the Easter egg hunt. Although the fire truck was a little late, several hundred kids and their parents were on hand to pick up Easter eggs set out by the sponsoring Rangely Elks Club at Elks Park on Saturday morning. 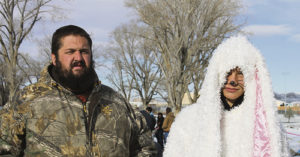 You can’t find an Easter Bunny, so father and son team Chris Hall and his son, Tristan, right, took care of the problem. Tristan volunteered for the part and helped out at the Rangely Elks’ Easter Egg Hunt on Saturday at Elks Park. The Hall family has been involved in many projects that keep Rangely functions going.

Zacharia (left) and Nicholas (right) Godwin had the chance Saturday morning to talk with Mr. and Mrs. Santa Claus at the annual Meeker Lions Club’s Breakfast with Santa, held at the Fairfield Center in downtown […]