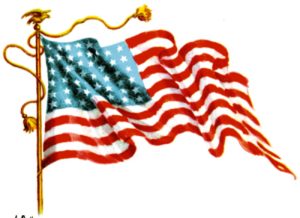 Memorial Day, May 30 (traditional), is a sacred day to all war veterans. America’s collective consciousness demands that all citizens be reminded of the deaths of their fellow countrymen during wartime. By honoring the nation’s war dead, we preserve their memory and thus their service and sacrifice. All U.S. flags should be displayed at half-staff during the morning hours. At noon, they should be raised back to full-staff.

It’s a sacred day to all war veterans: None need to be reminded of the reason that Memorial Day must be commemorated. But what about the general public, and more important, future generations? Do most non-veterans really recognize the importance of the day honoring their fellow Americans killed in war?
Judging from what Memorial Day has become — simply another day off from work — the answer is a resounding no. Perhaps a reminder is due, then. And it is the duty of each and every veteran to relay the message.
Sacrifice is meaningless without remembrance. America’s collective consciousness demands that all citizens recall and be aware of the deaths of their fellow countrymen during wartime.
Far too often, the nation as a whole takes for granted the freedoms all Americans enjoy. Those freedoms were paid for with the lives of others few of us actually knew. That’s why they are all collectively remembered on one special day.
This should be regarded as a civic obligation. For this is a national debt that can only be truly repaid by individual Americans. By honoring the nation’s war dead, we preserve their memory and thus their service and sacrifice in the memories of future generations.
They came from all walks of life and regions of the country. But they all had one thing in common — love of and loyalty to country. This bond cemented ties between them in times of trials, allowing a diverse lot of Americans to achieve monumental ends.
We remember the loss of loved ones, a sense of loss that takes group form. In essence, America is commemorating those who made the greatest sacrifice possible — giving one’s own life on behalf of others.
Means of paying tribute vary. Pausing for a few moments of personal silence is available to everyone.
Attending commemorative ceremonies is the most visible way of demonstrating remembrance: Placing flags at grave sites, marching in parades, sponsoring patriotic programs, dedicating memorials and wearing Buddy Poppies are examples.
Among all the flowers that evoke the memories and emotions of war is the red poppy, which became associated with war after the publication of a poem written by Col. John McCrae of Canada. The poem, “In Flander’s Field,” describes blowing red fields among the battleground of the fallen.
For more than 75 years, the VFW’s Buddy Poppy program has raised millions of dollars in support of veterans’ welfare and the well being of their dependents.
Whether done individually or collectively, it is the thought that counts. Personal as well as public acts of remembering are the ideal. Public displays of patriotism are essential if the notion of remembering war dead is to be instilled in youth.
As America’s older war veterans fast disappear from society’s landscape, there are fewer and fewer standard-bearers left to carry the torch of remembrance. Such traditions will live on only if there is a vibrant movement to which that torch can be passed.
Now, more than in recent years, the enduring relevance of Memorial Day should be clearly evident. With two wars under way, the public has no excuse not to remember.
This much is owed to the more than 4,500 Americans who have died thus far in Afghanistan and Iraq.
— Submitted by Tom Kilduff, commander, Meeker
VFW Post 5843
Courtesy of VFW Magazine

Editor’s note: A pastor and Marine veteran, Zielinske delivered this speech at rallies of the Meeker and Rangely-Dinosaur Tea Party groups. He is pastor of the Meeker Assembly of God Church. Though most of the […]