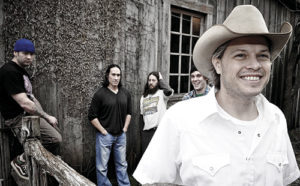 MEEKER I In a recent commercial-country star’s genre-defining song, the act of singing about Jesus, tractors and little towns is portrayed as an unfashionable act that runs counter to the current of societal norms. Rebellion is drinking a cold one, getting a little loud, although it’s never mentioned what the country folk are getting loud about. Country music seems to be an increasingly neutered genre, where nothing at all is said, where a hit song that welcomes a world where a black man could become president was seen as a bridge too far by some. Contrast that discomfort with the bravery of an artist like Merle Haggard producing a song like “Irma Jackson” in the late 1960s. That The Hag is name-checked by so many current country stars as an influence is ironic, given that the bravery exhibited in this one song is greater than the combined bravery of every artist currently on the country chart.
Into this tepid landscape, Jason Boland releases his latest album, Rancho Alto. Even though its songs are not likely to be topping the country charts anytime soon, Jason is adamant that this is country music. “It may fit in with some other types of music, like Americana maybe, but I’m not ready to give up on the idea that country music can be relevant,” says Jason. “And country music is what I play. My fans are George Strait fans. They go to the dance halls to see shows. I know these people. They are more capable of complex thought than the country music industry thinks they are.”
Jason was born and raised in Harrah, Okla. (like the casino he says — “there weren’t any around where I grew up, I used to joke, and now there are”) and went to college at Oklahoma State University, where he formed a band with some like-minded mates. Jason Boland and The Stragglers went on to become one of the most popular bands of that region, having released five albums since 1999 and having played in front of millions of fans during that time. Boland has certainly had his challenges along the way. His fraternal college drinking turned into frightening full-blown alcoholism, and he was ultimately admitted to Sierra Tucson Rehabilitation Center for 28 days in October 2005. In 2008, as his most recent studio album Comal County Blue was being released, he ruptured a polyp on his vocal cord, and doctors thought that he might not be able to sing again. Because the journey has been difficult, Jason operates with a deeper resolve to say something worth saying.
It used to be that a country artist would sing about the farmer that lost his land. Now they glorify that party at the lake. For those of you who love country music, but hate what it’s become, Jason Boland will sing you back home.

MEEKER I Located immediately west of Meeker, Ute Park is the July 7 concert site. Gates will open at 5 p.m., with Cody Canada and the Departed taking the stage at 7 p.m. Vendor booths […]

MEEKER I The 2012 Range Call Celebration came to close with the annual Ranch Rodeo. Seven teams entered the “Four-Man” event where four team members work together to tie down a roping steer, brand a […]

A salute to veteran Meeker pageant crew and cast

MEEKER I Welcome to Meeker and the 127th Range Call celebration. We hope that you will enjoy our 2012 and 74th annual presentation of “The Twilight of the Ute Empire.”