As part of the review, the DOI has set public meetings in communities around the country to solicit public feedback on the program. Tipton’s remarks were submitted at a meeting in Grand Junction, Colo.
In his remarks, Tipton addressed the issues of public returns on resource development, environmental impacts and the impacts decisions by the administration may have on coal-dependent communities.
Tipton said, “Coal mining is honest work that pays well and produces over half of Colorado’s electric generation. Yes, we should utilize all forms of energy at our disposal. Yes, we should ensure that the public receives a fair return on publicly owned resources. Yes, these resources should all be developed in an environmentally responsible way.
“But the department has not made a compelling case that a complete overhaul of the coal program and a delay in new leasing would achieve a cost-effective and measurable improvement over the status quo in any of the above,” he said. “It seems rather just another blow to an industry that is vital to our economic well-being, but is nonetheless squarely in the sites of this administration.”
Tipton also responded to the administration’s June 2016 report on the economics of coal leasing on federal lands.
“The question of whether the public is receiving a fair return on leases is an important one to ask, but it’s troubling that the administration has failed to recognize that its own policies are actively suppressing the production of coal and its associated revenues,” Tipton said. “Responsible coal production provides a reliable and affordable energy source for Americans, and I remain committed to policies that support an all-of-the-above energy policy,” Tipton said.

To better educate next generation, reinvent the classroom

Tony Seely: The importance of our nation’s veterans

Listen to this post EDITOR’S NOTE: Meeker native Tony Seely, a retired U.S. Air Force colonel, gave this speech on July 4, 2013, during the dedication of the Rio Blanco County Veterans Memorial on the […]

Back to school, with precautions 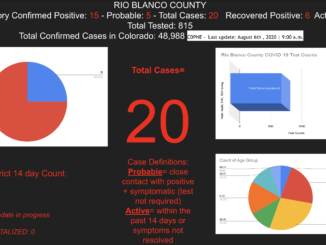