RANGELY — Like other Colorado communities, Rangely has a methamphetamine problem. 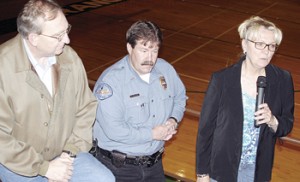 “It’s here,” said Elaine Urie, town council member and one of the organizers of a new drug and alcohol prevention group called the Trinity Project. “It’s massive.”
Among states, Colorado ranks No. 8 in methamphetamine use, and it’s No. 6 in identify theft.
“The two go hand-in-hand,” said Lynn Riemer of Act on Drugs, a non-profit organization that does awareness and drug prevention training for communities. “It’s a group (meth addicts) that can’t keep a job, so fraud and forgery are huge. Meth really started hitting the Denver area in 2001. We have a big problem in Colorado.”
Riemer gave a presentation last Thursday for high school students, and then spoke again later that night to community members. 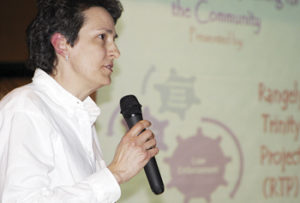 “We didn’t have a large turnout, but we had 10 people who are interested in helping out with future attempts to eradicate the drug here,” Urie said. “We have just begun the struggle here with meth.”
One of those who attended the community meeting identified himself as a meth user.
“He informed everyone that meth was a massive problem in Rangely,” Urie said.
People like Urie, Town Manager Peter Brixius and Vince Wilczek, police chief, decided it was time to step up efforts to rid the community of drugs, especially targeting methamphetamine use. That’s how the Trinity Project was started. The group, established locally about two months ago, focuses on law enforcement, education and faith-based recovery. Urie encouraged others to get involved.
“So many are just naive and bury their heads in the sand,” Urie said. “But we need this community and the whole area to be involved in the fight against meth. Law enforcement can’t do it all. We need people who will open their eyes. The more eyes on them (meth users), the more uncomfortable they will be. They’ll either leave, or they’ll get clean.” 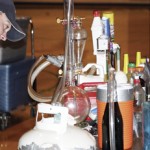 Two of the reasons meth is such a big problem is it’s easy to make, and it’s highly addictive.
“It’s not complicated to make, and the thing is, they are all legal (products)” Riemer said, who had a display of items needed to make meth.
“Nine out of 10 people are addicted after the first use. What it does is it releases dopamine in the brain, which gives a feeling of pleasure, and then they will continue to chase that feeling. Once meth gets its fingers out into a community, it destroys communities more than other drugs.”
Even though there wasn’t a big turnout for last week’s community meeting, the organizers weren’t discouraged.
“We have a long way to go, but we have started,” Urie said.
“There aren’t as many people here as I had hoped, but I don’t care,” Police Chief Wilczek added. “The kids we reach, it’s worth it.”

RANGELY I Last year, despite finishing second in the league standings and second in the district tournament, the Lady Panther volleyball team didn’t qualify for regionals, based on how other teams finished.

I want to thank the Rangely Rock Crawlers Club for putting on such a great event last weekend. Between the club, the volunteers and many of the townspeople the event was a huge success.

The Rangely school board accepted the resignation of Linda “Bennie” Bennett, principal of Parkview Elementary, at its May 15 board meeting. Bennett will pursue other opportunities.