MEEKER — “I think it’s really admirable when family and the community get together once a year to honor a man who is no longer with us,” Meeker Golf Course pro Jim Cook said regarding the second annual Bob Tucker Memorial golf tournament, benefiting the scholarship fund in memory of the late Meeker High School student/athlete and teacher/coach. 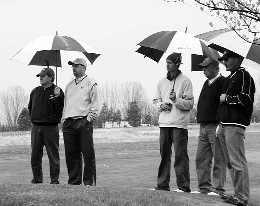 “It wasn’t so much about winning as it was about having fun and raising money for a good cause,” Cook said.
Players showed dedication to the cause by finishing the tournament in the rain, before a catered lunch and awards presentation.
“Last year we had snow, this year rain, maybe next year we’ll have sunshine,” Jo Tucker, who along with two of her three daughters, Shelie Tucker-Gustafson and Bobbie Jo Tucker, organized the tournament.
“We have great sponsors and are very appreciative of their support,” Shelie, the eldest daughter said. “We want to continue building the fund to sustain the years we can offer the scholarship and hopefully increase the amount and the number of scholarships awarded in the future.”
Tucker’s daughter Erin was unable to attend.
Thirteen teams competed in the four-person, 18-hole scramble, which was won by locals Dave Brown, Lex Collins, Matt Fellows and Pat Hughes. The quartet finished with an 11-under-par 53, five shots ahead of the nearest competitors.
“I think they only used two mulligans,” Cook said. “That’s some pretty good golf.”
Irv Griffin, Donald Blazon and Ron Kelly Crawford finished with the second best gross score.
Chad Luce, Jason Musser, Jake and Dick Welle, also shot a gross score of 58 but took first place net honors with a net score of 34.
Tommy Gilmore, Bobby Shelton, along with Greg and Dennis Rohn finished with a gross score of 59 and took second place net with a net score of 37.
The third recipient of the Bob Tucker Memorial Scholarship will be announced at graduation. Chas Mills and Tyler Howey were the first two Meeker High School student/athletes to earn the scholarship.
The Berry Brothers tournament is the next on the schedule at the Meeker Golf Course. The 27-hole, two-person scramble will be played May 16.

MEEKER | In the final tournament of the season, the Meeker Golf Course is played backwards, which is followed a dinner and the annual membership meeting. This year three directors were elected and the board asked […]