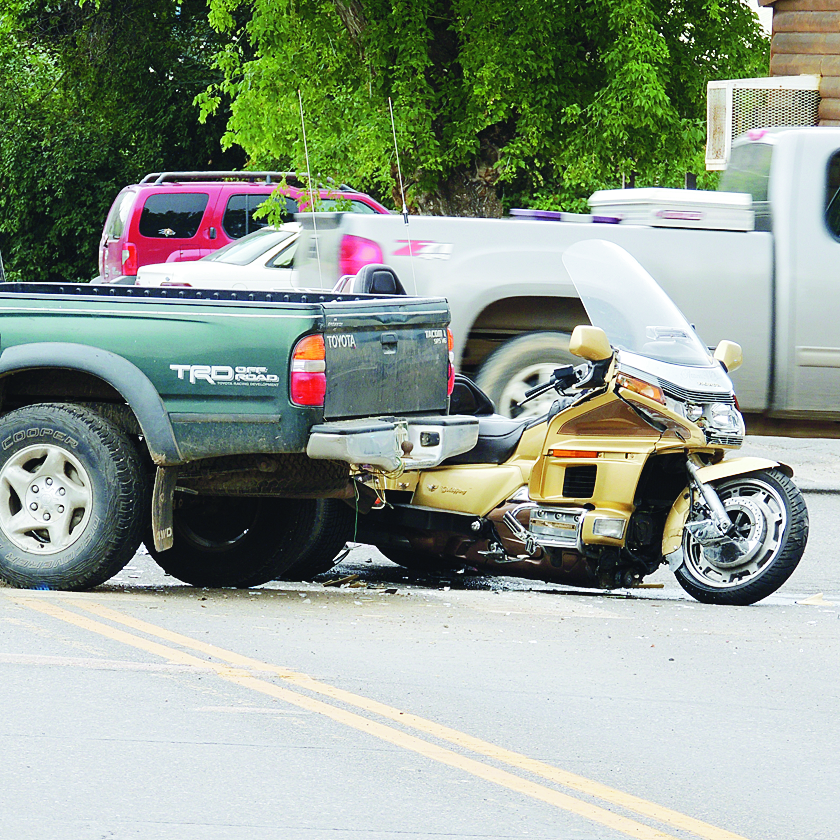 MEEKER | Just prior to 1 p.m. on Friday, an injury accident was reported between a motorcycle pulling a small trailer and a pickup truck at the intersection of Market Street and 6th Street.
The Meeker Police Department reported that the accident involved two people from Whitewater, Colo., on the motorcycle and a local man in a pickup truck. Several citizens attended to the victims until Meeker Fire and Rescue arrived on scene.
The man and woman on the motorcycle were taken to Pioneers Medical Center by ambulance. The male driver was later transferred to Grand Junction with head injuries but in fair condition. He is still hospitalized in Grand Junction as of Monday morning. The driver of the pickup was uninjured.
The motorcycle was westbound on Market Street and the truck was turning left from the eastbound lane on Market Street, attempting to turn left onto 6th Street when the accident occurred.
The westbound lane of traffic on Market Street was closed for three hours while officers from Meeker Police Department, the Rio Blanco Sheriff’s Office and the Colorado State Patrol conducted an investigation to include reconstruction of the accident scene.
According to Meeker Police Department, the accident is still under investigation.

MEEKER I Cowboys runners continue to improve their times as the state-qualifying regional meet gets closer on the schedule. Six Meeker cross country members ran in Fruita last Saturday in the Anna Banana Memorial Wildcat […]

Vindicated: Theos cleared of wrongdoing in death of Robinson

MEEKER I When the verdict was announced Friday night — after a six-member jury in Grand Junction deliberated for some three hours — Nick Theos was vindicated.

After Hours tonight in Meeker

The Meeker Chamber of Commerce invites members and guests to an “after hours” at Gofer Foods convenience store, home of Champs Chicken, today starting at 5 p.m.