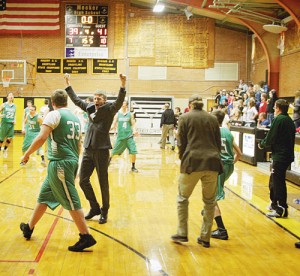 Eric Hejl, the Rangely High School boys’ head basketball coach, was excited after winning the 2013 WREA Cowboy Shootou,and he has been quoted as saying he is “excited about 2014.” The 2014 part of the schedule will start for the Panthers on Saturday, when they host Little Snake River, boys and girls. Rangely’s wrestling team will open 2014 in Vernal, Utah, at the Tournament of Champions on Jan. 10-11. Meeker’s wrestling team, currently ranked No. 2 in 2A, will also compete in the TOC in Vernal, but will host Grand Valley on Jan. 9. The Meeker boys and girls basketball teams will host Hotchkiss on Jan. 10 to tip off 2014.

Panthers lose to Tigers on road, beat Rams at home

Listen to this post RANGELY I “This is gonna be one of those games that got away,” Rangely boys’ basketball coach Eric Hejl said about the 42-49 loss in Hayden after his team jumped out […]

Panther boys reopen season on court with victory and loss

Listen to this post RANGELY I The Rangely High School Panther boys’ basketball team played two league games last week, pounding the Plateau Valley Cowboys 44-21 in Meeker then losing to Cedaredge, 38-46, on the […]