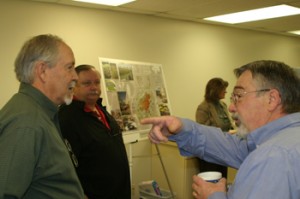 RANGELY I Ballots were mailed last Friday, asking voters to support a $38.7 million bond election to build a new hospital.
Results, however, won’t be known until May 4. That is the deadline for returning ballots in the special district election.
“They are due back by 7 p.m. on May 4,” said Kristin Beery, executive assistant for the hospital. “They have to be in my office by that time; postmarked does not count as received. They can either be mailed or dropped off in the ballot box in the hospital lobby.”
In 2007, Rangely voters rejected a proposal to support a bond election for a new hospital. This time around, Nick Goshe, Rangely District Hospital’s chief executive officer, who wasn’t involved in the previous election, hopes the outcome will be different.
“I feel good,” Goshe said. “At the start, a lot of these people were unsure. But, from what they’re telling us, it sounds like we’re answering their questions and they support it. I’ve had people tell me they were against it until they came to the presentations. Basically, we’ve just been trying to get the word out.”
Over the last several months, RDH administrators and board of directors have made a series of public presentations about the hospital’s plan to build a new facility and have provided information about the proposal through promotional materials, including having a booth at last year’s Septemberfest.
“I think having our board very involved, it helps,” Goshe said. “They’re talking to people one-on-one. That probably helps as much as anything.”
Whether at a public presentation or in a one-on-one conversation, Goshe hopes the efforts to explain to voters why a new hospital is needed will pay off.
“They didn’t do that last time,” Goshe said. “They didn’t make that investment upfront, and that’s come across in the meetings. But we felt we had to do that, so people would have the information to answer their questions. During the presentation at Radino (Senior Center), it seemed like at the beginning there was a lot of negativity, but afterward one of the ladies came up to us and said, ‘You guys really answered our questions. We really need this.’ That makes you feel good.”
Jack Rich, chairman of the hospital board, said a concerted effort has been made to respond to people’s questions and concerns.
“We’ve been listening to the community, to what people want and need, and we’ve responded to those needs,” Rich said, noting transparency of information, local medical services and staff retention.
Officials say building a new hospital is preferable to restoring the existing one, which was built in 1961, because of costs to upgrade an aging facility and it wouldn’t address the need for more space.
“We looked at the possibility of renovating, but the cost of construction alone to remodel is about $22 million. Add financing and other charges and it’s about $32 million, and that’s a conservative number,” said board member Stephen Petersburg. “A remodel would not correct any of the space issues … and another question is how to care for patients when we have a remodel going on. There’s no other place to move them.
“Here’s where we are as a community: If we want to keep a hospital, we need to spend some money, either remodeling or new construction … so we don’t end up with Band-Aid care, rather than a hospital,” Petersburg said. “New construction is much cheaper on a per-foot basis.”
The initial hospital building has undergone past renovations. The clinic was added in 1973 and a basement in 1983. When it comes to new construction versus remodeling, Bernie Rice, the hospital’s compliance officer, said, “We’ve effectively run out of space. The building cannot accommodate the changes in technology. When you start to renovate, a small project turns into something monumental.
“The other problem we run into is … all of the additions outside of the original constraints, it all adds strain to the system (not set up for the additional load). We’re about patched out.”
The board considered different locations for a new hospital before settling on a 20-acre site owned by the Bureau of Land Management across from the current hospital. Hospital officials are awaiting finalization of the lease-purchase agreement with the BLM.
“I am told it is in process and we should be hearing any day now,” Goshe said of the land agreement.
Goshe said other positives about building a new hospital versus remodeling are construction costs and interest rates are low.
“One of the questions is why do this now during a recession?” Goshe said, mentioning competitive bids from architects and contractors hungry for work, low material costs and the economic impact locally of a two-year construction project.
“Making right now a very appealing time to do a hospital project,” Goshe said, adding an estimated $4.5 million will be spent locally. “Every business in town will feel a positive impact from this project. There’s going to be a positive benefit … and during this slump, this might help us make it through it.”
To put it in terms of real numbers for homeowners, hospital officials have calculated the impact to be less than $45 a year on a $100,000 home, or $3.60 per month, which will be used repay the bond during the 25-year duration of the loan.
It’s an investment, Goshe and the board of directors hopes the community is willing to make.
“We’re getting good feedback. Still, until you see the vote, you just never know,” Goshe said. “But we’re doing everything we can.”

Listen to this post RANGELY | The Epsilon Chi Sorority of Epsilon Sigma Alpha (ESA) will once again hold its annual holiday bazaar Sunday, Nov. 13 at Parkview Elementary School from noon until 5 p.m.

From ‘Most Handsome Boudoir Cap’ to catching the Fair bug