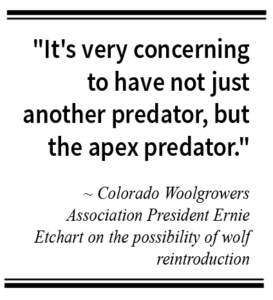 RBC | The potential introduction of wolves into Colorado dominated discussion for a second year at the Rio Blanco County Woolgrowers annual meeting.

While the sale price for wool is up 16 percent, and grazing fees are down, there wasn’t much more in the way of positive news shared at the meeting. The industry faces threats from regulations related to bighorn sheep, wolves returning to the state, and lawsuits from environmental groups like WildEarth Guardians.

The state’s growing bighorn sheep population threatens domestic sheep production. There is a concern that domestic sheep carry a disease pathogen—mycoplasma ovipneumonia—that can be transmitted to the bighorns, prompting restrictions on grazing to reduce or eliminate contact between bighorn sheep and domestic sheep. For producers who pay for grazing allotments in the high country, that can be a problem.

Mycoplasma ovipneumonia is not limited to bighorn sheep. The disease has been found in bison, antelope, elk and deer, among others.

“Bighorn advocacy groups tend to believe domestic sheep are the only ones who carry this,” Etchart said.

“If WildEarth Guardians wins, it will be a huge precedent,” Etchart said.

WildEarth Guardians and other groups are taking advantage of the Equal Access to Justice Act— established to compensate U.S. veterans—in order to fund their organizations, according to Etchart.

Etchart said he expects more collaborative support from cattlemen about wolf introduction. “Wolves are a threat for them, too,” he said. “It’s very concerning to have not just another predator, but the apex predator.”

Introduction of wolves—not native wolves, but Canadian wolves—has been suggested for the Flat Tops, the Grand Mesa, the San Juans and the Uncompahgre. The bulk of support for bringing wolves back to Colorado is on the Front Range, where residents will likely be physically unaffected.

A Cody, Wyo., resident visiting the meeting—where wolves have been established—“make sure they give you facts, not just guesses; we’ve really struggled.” According to the Wyoming guest, their elk population dropped from 19,600 to 4,300.

Brown said she is working to distill the “enormous amount of information” out there into readily accessible forms to inform the public.

Besides the obvious concerns of livestock producers about wolf predation, concerns about hydatid disease—infection with tapeworm larvae which generally affects the liver and lungs—have been brought up as another threat related to wolves.

Hydatid disease is well-documented in more than half the gray wolves tested in Idaho and Montana. The disease can be transferred to elk, deer, moose, bighorns, domestic dogs, domestic sheep and humans.

Etchart said Woolgrowers has been very active with the Stop the Wolf Coalition and encouraged the local chapter to support the coalition financially.

Reportedly, the Turner Endangered Species Foundation plans to put wolf reintroduction on the Colorado ballot in 2020, despite recommendations from Colorado Parks and Wildlife, sportsmen, livestock producers, USDA Wildlife Services and others.

Regardless, according to Wildlife Services state director Martin Lowney, “Wolves are going to wind up here in the next 10 years, find each other and set up a pack. So, what’s the plan when they get here?”

The fine for killing a wolf is $25,000 because they are an endangered species.

Bears are currently the costliest predator, with Colorado Parks and Wildlife reporting payouts of more than $100,000 last year for sheep losses in northwest Colorado.

“We’re working as much as we can with the limited tools we have,” said Area Wildlife Manager Bill de Vergie. “We don’t have the tools we had in the 70’s, 80’s and 90’s. Coming up this year there will be a reduced license for non-resident hunters coming in to buy a bear tag.  We’re trying to come up with areas where hunters can have two licenses. Hopefully getting a better harvest.”

RBC I Colorado Parks and Wildlife held a meeting in Rangely on Feb. 1 to discuss the future of the thriving local bear population.