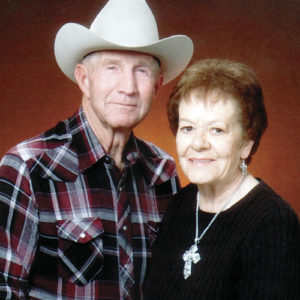 RBC I From the snow on the mountaintops to the dirt in the arena, Don and Rosemary Hilkey help make events special in Meeker.
Don was born and raised in Meeker. He has worked on a ranch all his life, including 40 years on the LaGrange Ranch. He, along with his brother Ron and son Troy, have kept the White River Snowmobile Club trails groomed and marked from the beginning. Snowmobiling has been a family activity for the Hilkeys as their grandkids now enjoy the excitement of the sport.
Rosemary moved to Meeker her junior year of high school, graduating in 1958. She and Don were married in 1959. She was a beauty operator for a few years before going to work for social services. She worked there for 27 years before retiring in 1996.
She has been very involved in the Range Call Association and got the idea to start the drill team after the 4-H club had one. She watched films on technical routines and the team began in 1987. She has seldom missed an event with the drill team since, performing in rodeos and parades all over the state. The horse she used from the beginning is retired now at the age of 33. He (Rosh) provided a consistent gentle demeanor that enabled Rosemary to carry the flag in parades and at the Meeker Pageant. She has presented the flag for many occasions and plans to do the same on her new horse. When she is not practicing for the drill team, Rosemary barrel races competitively, competing in area National Barrel Racing Association events. She has overcome injuries and helped the drill team persevere, remaining a steady figure in the Range Call Celebration.
“I like it all,” Rosemary said about the annual celebration. “All the people in town enjoying the events.”
She added, “I have always liked rodeos.”
She hopes the involvement and participation in Range Call gets back to where it once was and praised the hard-working people on the committee.
“They are good people to work with,” she said.
When asked about the drill team, Rosemary replied, “We have fun together, it’s what it’s all about.” Rosemary also helps take tickets and work the events of the celebration and is an example of one of the many volunteers it takes to pull the fun-filled week of activities together.
Don and Rosemary have two children, Troy (Rhonda) Hilkey and Melanie (Lyle) McKee all of Meeker. They have four grandchildren: Jessica (Brett) Berthelson, Nicole Hilkey, Donny and Tia McKee, and two great-grandchildren, McKenna and Brady Berthelson.
Whether in the middle of winter taking a club ride through fresh snow, or in the heat of summer celebrating Independence Day, there is seldom an occasion a member of the Hilkey family is not helping with.
Don and Rosemary have helped keep two very special traditional activities alive in Meeker. Their commitment sets an example and hopefully provokes increased involvement by others.

Listen to this post MEEKER I Nyla and Dick Merriam have passed down a sincere appreciation of life, career longevity and set an example of a marriage that lasts the test of time — having […]

Listen to this post By Julie Noyes julie@theheraldtimes.com RANGELY | No one would guess by looking at spunky third-grader Alivia Green of Rangely that at two weeks of age she was diagnosed with Coarctation of […]

Humor, heart handed down through the generations

Listen to this post MEEKER I “There are two lasting bequests we can give our children, one is roots, the other is wings.” this quote is true of many of the people who came to […]