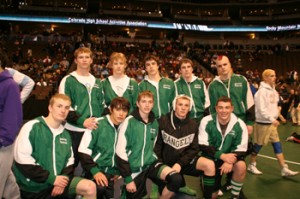 RANGELY I For the first time since 1997, Rangely has a state wrestling champion.
And he did it in dramatic fashion.
Senior Travis Witherell recorded a takedown in overtime to win the individual title in the 152-pound weight class Saturday at the state wrestling championships in Denver.
“It was my life’s goal and I finally got it accomplished, and to get it my senior year,” said Witherell, who was a state runner-up as a sophomore and finished fourth last year.
Witherell, who was ranked at or near the top of his weight class throughout the season, had plenty of motivation going in to the state tournament.
“That’s what drove me, knowing this was my last year and knowing I had an opportunity to be a state champion,” Witherell said. “I had wrestled all the kids who were ranked below me and beat ’em, so I knew I could get it done.”
Rangely’s Devon Rose was the state runner-up at 130 pounds, while Kindal Cushman finished fifth at heavyweight. All three wrestlers — Witherell, Rose and Cushman are seniors.
“All in all, I’m happy with how we did,” said Rangely coach Jeff LeBleu. “Devon, that was our heartbreaker. It was kind of controversial. But he’s placed all four years.”
As a team, the Panthers placed sixth in the overall scoring.
“We didn’t have enough (individuals advance) to be in the running for first or second, but we were only a point out of fifth and not too far out of fourth,” LeBleu.
Ty Petersburg was Rangely’s last state champion, at 189 pounds. That was 13 years ago.
Witherell has had to overcome adversity on his journey to becoming a state champion. His father, Brad, died in January of his freshman year — the only time Witherell didn’t qualify for the state tournament — and last year he had a cast taken off of his broken right hand before regionals.
“Every year, there has always been something else he has had to deal with,” Witherell’s mother, Sue Striegel, said. “That says something about his character. I’m proud of Travis for what he does on the mat, but I’m more proud of what he does off the mat.”
Witherell did plenty on the mat at the state tournament. In the finals, he managed an escape as the clock expired in the third period, forcing the overtime.
“He (Witherell) was behind by one, then he pretty much reversed the kid, but they didn’t give him the reversal,” said Rangely wrestling coach LeBleu. “But they gave him the escape, which tied it. Then he took him down in the overtime to win. When he was awarded the takedown, that was it. The first to score in the overtime wins.”
LeBleu and Witherell embraced after the final match.
“They say white guys can’t jump, but I was jumping I was so excited,” LeBleu said.
LeBleu and Witherell have formed a special bond. They both have lost their fathers.
LeBleu’s father, Jerry LeBleu Sr., died the same day as the Panthers left for the regional tournament. The team then delayed leaving for the state tournament, so the wrestlers could attend the funeral for Jerry LeBleu Sr.
“He went through it three years ago,” the Rangely coach said of Witherell. “So he deserved it.”
LeBleu has been on an emotional roller-coaster since the death of his father.
“There were a couple of days where it was kinda hard,” LeBleu said Sunday as the team was traveling back from the state tournament. “But after we got to wrestle (at state), my mind was off of it. This week will probably be the hard week, getting back to Rangely and not having to go to practice. I’m gonna go out there (to the cemetery) and spend some time with him.”
Witherell knows what his coach has been going through.
“It was hard for him and hard for me as well, because I know how he felt,” Witherell said. “I knew what was going through his head.”
Witherell comes from a long line of wrestlers. His grandfather, father and brother were wrestlers. His brother Jacob, who also wrestled for Rangely, was on hand to watch his younger brother compete at state.
“That was really nice,” Travis Witherell said.
At the same time, Witherell’s mind was on the person who was not there to watch him win a state title — his father.
“It was hard, him not being there,” Witherell said. “I wish he could have been there. Usually, before every match, I say a little prayer for him.”
Winning a state championship was made even more emotional for Witherell, given the circumstances with his coach and his own sense of loss. But he got to share it with his mom, his brother and his coach.
“We were all down there. We just group-hugged and cried,” Witherell said.
His mom, Sue Striegel, did her part to support her son, wearing his trademark black socks with green polka dots.
“That was kind of a thing to cheer him on,” Witherell’s mom said. “He didn’t even know I had ’em on until I went down there (after the final match). He had stopped wearing them, because it got too popular and everyone was wearing them, so it wasn’t his thing anymore. I felt it was my job to bring them out of retirement.”
But Striegel was quick to point out, it wasn’t the socks that resulted in her son’s victory, it was his ability and desire.
“I would like to say (the socks) were good luck, but it was all Travis,” Striegel said. “He had the will and the drive and he got what he wanted. It was a very emotional weekend for all of us.
“We are so proud of Travis,” his mother said. “You know, it’s unexplainable (the feeling). It’s something he always dreamed of, and I knew in my heart it would happen someday. This year, he knew it was his last chance, and he pulled it off.”

Listen to this post RANGELY I It was a big week for the Lady Panthers. Their head coach, Jimmie Mergleman, delivered a baby boy the morning of Oct 13. Then there was the always-intense matchup […]

Listen to this post MEEKER I The Meeker Post Office warned that postal customers may receive bogus e-mails about a package delivery. The e-mails contain a link that, when opened, installs a malicious virus capable […]

Listen to this post RANGELY | The Rangely Food Bank is located at the Assembly of God Church, 204 E. Rio Blanco, and is accessed by the double doors on the east side of the […]