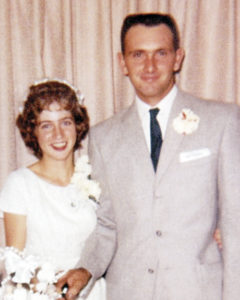 RANGELY I Longtime Rangely residents Garry and Sandy Wright are this week’s “home of” honorees. The Wrights were married 50 years ago on Aug. 2, 1962. In the years that followed, many things happened in many different places.
Garry and Sandy met in Carbondale where Sandy was in high school. Her parents owned a trailer court. In 1960, Garry rented a trailer space there and worked on road construction.
After Sandy was graduated from high school in 1962 they were married in Silt, the town where Garry grew up. They moved around to Walsenburg, Fairplay and Trinidad for road construction work.
While in Walsenburg, their first daughter, Monica, was born in 1964. The state highway department hired Garry in late 1964 and the family moved to Ouray where their second daughter, Laura, was born. In 1966, they moved to Rangely where daughter number three, Sylvia, was born. They lived in Rangely 27 years.
Garry was a volunteer fireman with the Rangely Rural Fire Department for 20 years, being fire chief twice. Sandy was a 4-H leader and a Brownie Scout leader. They also helped form a CB club.
Garry worked with the state highway department until 1979, then worked for the town of Rangely and in the oil field. Sandy worked at the school lunch room and at the Anchor Club Café. The Wrights purchased Magalions Restaurant in 1983 and operated it for 10 1/2 years. They decided to sell the restaurant and retire up the White River where they enjoyed many years camping, fishing and hunting with the family.
They both decided retirement was not for them, so Sandy worked at Sleepy Cat Guest Ranch for nine years and Garry was area manager for the campgrounds. After that they worked at Buford and Fritzlans. Now they enjoy traveling to work and host a campground in Arizona.
“Guess we just aren’t ready to pack it in yet. When we do, it’s not out of the question to once again live in Rangely as it will always be home to us. We left a lot of happy memories and friends, but are content where we are in life right now,” Sandy said.
The Wrights have three daughters, four grandchildren and one great-granddaughter. Their daughter Monica Rhodes and her husband Randy of Casper, Wyo., have two daughters, Ashley Davis and Kelly Rhodes. Ashley lives in Casper, Wyo., with her husband Eddie Davis and daughter Hailey. Kelly lives in Fruita and is engaged to Dave Menton also of Fruita. The Wrights’ middle daughter is Laura Osborne. Laura and her husband Jake reside in Rangely. Laura and Jake have a son, Logan Osborne of Denver. Garry and Sandy’s youngest daughter Sylvia Dembowski and husband Aaron and daughter Justyne also live in Rangely.

Listen to this post Celebrating the best 33 years of their lives, Randy and Teresa Ridgeway were married June 21, 1979, at Miller Creek.