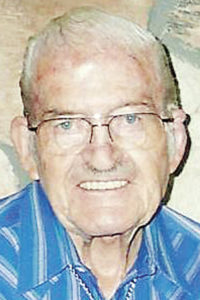 Lawrence William Marshall Jr., known by family as “Bill” and by his many friends as “Larry” was the first born Son of Lawrence “Doc” and Eva E. (Evans) Marshall.  Bill was born May 24, 1922, at the Red Cross Hospital in Oak Creek, Colo. His parents were cattle ranchers and ran the 21 Ranch near Burns, Colo. He passed away Feb. 12, 2012, at the Walbridge Memorial Wing in Meeker, Colo.
Bill was raised on the 21 Ranch, until his parents bought the Gibbs Ranch three miles south of Yampa, Colo., now known as the Finger Rock Ranch.  In 1928 the family was in the process of moving into their newly remodeled ranch home when his mother Eva took sick and passed away, leaving Bill, 5, to be raised with his three siblings by their dad.
Bill grew up in that Greatest Generation from horseback to computers. He attended the Yampa School, riding horseback to and from school.  He was introduced to electronics through a radio and listening to favorite shows weekly. He loved dairy cows and tried to start a herd of his own, but his real passion as a young man was in the new world of electronics. So, leaving the ranch and its way of life, he moved to Golden, Colo., and taught himself all he could about repairing radios, TVs and appliances, opening his own business, “Larry’s Radio and TV Sales and Service” in Lakewood, Colo. He owned this business from 1950-1972.
Lawrence married Fern Smith in Denver, Colo., and to this union two daughters were born: Judith and Janet Marshall. Larry and Fern were divorced and the girls were raised by their mother and stepdad.
Lawrence married Gladys I. Rumbo on Oct. 24, 1952, in Raton, N.M. Gladys was a teacher in Golden, Colo. They lived in Golden and Lakewood. Lawrence continued to run his business and Gladys continued teaching for more than 35 years. They both retired in 1972.
As the generation in which airplanes were designed as we know them today, Lawrence wanted to learn to fly. He and Gladys became active in the Civil Air Patrol. He became a Lt. Colonel and was given the Meritorious Service Award in 1972.  He served with the Civil Air Patrol from 1950-1986 in both Colorado and New Mexico.
Upon retirement in 1972 they moved to Rio Rancho/Albuquerque, N.M. He continued with the Civil Air Patrol in N.M. He was the handyman in the retirement communities they lived in until 2005. He served for several years on the Rio Rancho City Council. During all of this time, he was also serving as the state assistant director of the New Mexico AARP organization. Retiring from the Civil Air Patrol and AARP in 1986, Lawrence and Gladys spent their second retirement traveling and enjoying various timeshares throughout Colorado, New Mexico and Arizona, along with owning their own homes in Albuquerque and Quartzite, Ariz.
Due to their health they returned to Colorado to be near their niece Linda and (Dusty) Long and family, and his sister Marguerite. They lived for a short time in Craig, Colo., moving into the Haven Assisted Living in Hayden, Colo. Since September 2009, Lawrence has lived at the Walbridge Memorial Wing in Meeker, Colo.
Lawrence’s passion throughout his life was his love for music, teaching himself how to play the guitar, organ and harmonica. He had a collection of records, tapes and CDs, tapping many jamborees while traveling, along with photography, having a collection of cameras, and he loved taking landscape pictures from their travels.­
Lawrence was preceded in death by his parents, his wife of 58 years Gladys Marshall, his stepmother Lucy Marshall, sister Marian Sage, daughter Judith Marshall, nephews Leonard and Douglas Glaze, and niece Patricia Sage.
He is survived by daughter Janet (Ronald) Darling, grandchildren Christy and Brian Darling all of Silverthorne, Colo.; sister Marguerite Anderson of Oak Creek, Colo.; brother Virgil “Bummy” (Clarice) Marshall of Clifton, Colo.; nieces Linda (Dusty) Long, Sharon Glaze, Sherry (Kenneth) Slape, Becky Marshall (Tom); Shelia(Charles) Ford; nephews- Ronald (Cathy) Marshall and Wesley (Nancy) Sage; and many great-nieces and -nephews, and great-great-nieces and -nephews.
Funeral services were held Thursday, Feb. 16, 2012 at the Yampa Bible Church in Yampa, Colo., with Matthew Froah officiating. Interment followed in the Yampa Cemetery. Memorial donations may be made to the Yampa Bible Church or the Walbridge Memorial Wing in care of Grant Mortuary.

Mike broke his earthly bonds, beginning his trip to heaven on Jan. 27, 2014, as a result of a motorcycle accident in Naples, Fla.