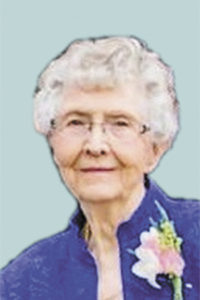 Nyla Argene (Taylor) Merriam passed away on July 18, 2019, at the Pioneer Medical Center in Meeker, Colorado.

She was born June 23, 1929, to Sherman A. and Deltha (Thompson) Taylor in LaPoint, Utah. They lived on a farm in Deep Creek and she attended first grade in LaPoint. The Taylors moved to Meeker, Colorado, in September 1936. Nyla attended Meeker schools and graduated as the Salutatorian of her class in 1947.

She met Dick L. Merriam at her father’s store. He was a sheep rancher with his brother, DeWayne, and had recently moved to Meeker from Utah. Dick and Nyla were married on February 21, 1948, in Meeker.

Nyla’s personal life embodied all of the recognized characteristics of a “good” person. She was humble, unselfish, forgiving, sacrificing personal interests for the welfare of others, hard working and sharing what she had with others.

Her life of 90 years was celebrated by her great appreciation for her family and friends. Serving others and making everyone comfortable and happy was her calling.

She committed her life to the responsibilities she accepted in her many endeavors. She was a dedicated employee of the telephone company as an operator, before dial phones were installed in Meeker. She knew everyone’s phone number. She personally and professionally enjoyed twenty seven years of service with White River Electric as an inventory clerk. She valued her jobs and the people she worked with in each of her positions.

The main emphasis in her life was serving, engaging with, and hosting friends and family in the many events that brought people together. The Fourth of July picnic at the Merriams was a tradition for many years. It was attended by family and friends as a part of the community celebration. Nyla could put a delicious meal together for as many people who would show up without any apparent effort. She raised a large garden and preserved the vegetables to be used throughout the year. The point in all of her intentions was getting people together to visit, enjoying each other and having a wonderful meal.

She and Dick followed their family through all of the activities in which they participated. They very seldom missed a baseball, basketball or football game. This dedication to sports and activities continued with grandchildren. Education, athletics, band, cheerleading and school activities were highly prioritized in the Merriam household. She advocated for individuals, teams and coaches in many sports and artistic programs throughout her life. Nyla continued to be a super fan of the Denver Broncos, Denver Nuggets and Colorado Rockies. She didn’t miss a game on TV, kept statistics and knew the names of every player.

In later years, when some families lose contact and can’t keep up with personal issues and events, the Merriam family stayed in contact. Sunday morning phone calls from her sons and daughter happened like clock work. For 17 years, every Sunday was filled with communication, laughter and memories to bring all of the families together in thought and word. Nyla was the conduit for family information.

She is survived by her brother Byron and his wife Sharon; her daughter Joyce Hawkins; and four sons John, Donald, Gary and Gordon.

Nyla always acknowledged her daughters-in-law as her girls. Sally, Kathy, Patti and Beth were very involved in her life and had more influence in her decisions than their husbands.

Nyla was blessed to have 14 grandchildren and 22 great-grandchildren with the 23rd due in September. She loved and valued each in her own way and recognized and respected each of their unique personal traits. She includes her cousins, nieces and nephews as cherished members of her close knit family.

Nyla’s last three years were spent as a resident in the Walbridge Wing in Meeker, Colorado. She praised the support she received from each and every member of that staff. She always proclaimed, “I am in the best place I could possibly be.” The genuine caring, respectful nature of the staff, and the world class facility made her life whole in her final years. Our family thanks and appreciates all who comforted our mother, grandmother and great-grandmother.

The family has asked in lieu of flowers, donations may be made to the Walbridge Wing at the Pioneer Medical Center or the Volunteer Fire and Rescue Department in Meeker, Colorado.