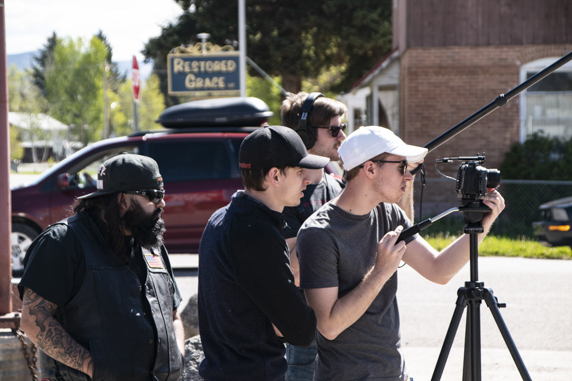 RBC | Movie producer and former Meeker resident Calvin Shepherd has been in the Meeker area recently, filming his latest full-length motion picture “Country Mustard.” Shepherd is not new to the movie-making scene… He’s made numerous short films and his full-length film “Forgery” won the Jury Prize for Best Narrative Feature at the Denver Underground Film Festival earlier this year. To use the parlance of the genre, this ain’t his first rodeo.

Doing his own script writing, Shepherd created the storyline for “Country Mustard” with the Meeker area in mind. Categorized by IMDB.com as a “Thriller Western”, the story plot is described as follows:

“After the murder of his father by a local biker gang, Cole returns home to inherit his father’s ranch despite his step-mother and brothers’ determination to keep it for themselves.”

Shepherd took the time to answer some interview questions while he was visiting at Wendll’s.

Shepherd: “When I was going to college in Kansas, I wanted to do journalism and I wanted to do English teaching. And one day, I called my dad and mom and said that I’m done making backup plans. I know what I want to do. I had been making shorts in Kathleen Kelly’s class for a long time in high school and I had beenwriting them while I was there. I said I know what I want to do and I’m going to go do it. So I transferred to UNC (University of Northern Colorado) and joined the Film Club, made three short films one semester, then made another short film the next semester, then a feature, then “Forgery”… and now this [Country Mustard].” 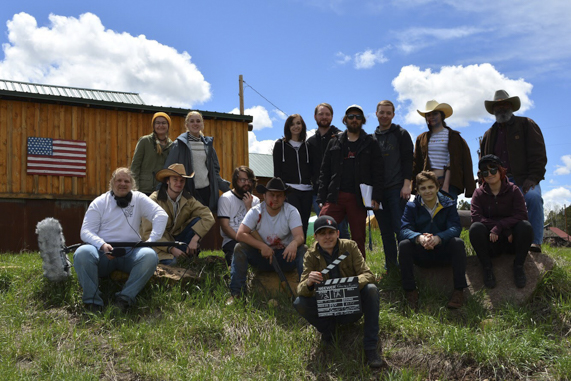 HT: Who were your influences?

Shepherd: “I love Scorsese films, especially ‘The Departed.’ That movie changed everything for me. All the plot twists are amazing. Then there’s ‘Goodfellas,’ ‘Taxi Driver’ and ‘Raging Bull.’ I love Scorsese a lot. Then there’s Tarantino… I’ve tried to stay away from it, but Tarantino was also a huge influence. Tarantino’s influence kind of hits me more by how he uses other movies in his movies. That’s one of the biggest things I take from him… All the movies I love influence the movies I make. There’s little homages to thousands of different movies in one movie.”

HT: What part of the filmmaking process do you prefer? Producer, writer, director, actor?

Shepherd: “Definitely not acting. It’s definitely not my thing. My favorite thing to do is to sit down and write it [the story], imagine it, then start breaking down all the shots. I’ve been working on this one [Country Mustard] for over a year. It’s all starting to come together and it’s really cool. I don’t like being in front of the camera. I have 172 scripts in process. Not all of them are finished, but I have probably 15 scripts ahead of ‘Country Mustard’.”

HT: Why did you choose Meeker as the location for this film?

Shepherd: “We’re filming a lot of the outdoor scenes at Fritzlan’s Guest Ranch which belongs to my great-grandmother. I spent a lot of time there with my dad growing up and I’ve heard stories about that place my whole life. From the moment I wrote ‘Country Mustard’, I said I wouldn’t film it anywhere else. I imagined it in Meeker. It’s also easier to get into places to shoot. When I was filming movies in Greeley and Loveland, it was difficult to get places to film inside. In Meeker, all I had to do is call up the bar [Chipper’s] and he’s in for letting us in and I called around town and everyone was excited to help, so it’s the perfect place to film.”

HT: What advice do you have for the youth of Rio Blanco County who may be considering going into the movie business?

Meeker’s Calvin Shepherd will be in town this Friday and Saturday at the Meeker Public Library for the showing of his film, “Country Mustard.” Last spring, Calvin Shepherd and his production team, filled with diverse, […]