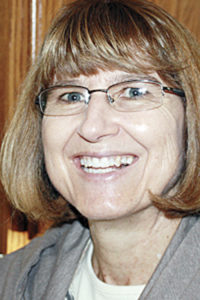 RANGELY I The Western Rio Blanco Recreation Center will never be quite the same after this week. Longtime administrative assistant Paula Padilla is retiring after 34 years. Padilla started with the district in 1977, working out of two rooms in the Frontier Electric building while the  current recreation center was under construction. The new recreation center brought new challenges to her job and great changes followed. She says the biggest changes have been in technology. She started working at the center using IBM memory typewriters and then graduated to computers. There were no classes available to help learn the new technology. Padilla remembers simply “plowing through it,” and in so doing, learning the ins and outs of the system better by just figuring it out on her own. Over the past 34 years she has done far more than just figure it out, as the finances of such a large entity are anything but simple. She has also seen the facility through three bond issues, many construction projects and an amazing number of employees. Padilla has worked for four different directors and at three different swimming pools: the original aluminum pool, the concrete pool and now the newest reconstructed version of the pool. She has served as the interim director, mowed lawns in the parks and taught aerobics for the recreation center. “The only thing I haven’t done is get my lifeguard certification,” she said. She attributes that to her swimming ability.During the peak season the recreation center is the largest hangout for youth in the community and she has enjoyed seeing entire families play, and work, at the facility. She compared her job to working in education because of the way she has watched families grow over the years. The Skeltons and Mullens are two examples of multi-family employees. Padilla has enjoyed the flexibility of her career. It was key to her raising a family as she job-shared for 17 years while raising her children. She became the full-time administrative assistant in 1984. When the staff first began in the new building, they all shared an office in the upper part of the building. In the most recent remodel more office space was provided. She has also served as the bookkeeper for the Rangely Chamber of Commerce for several years. Tim Webber became the recreation center director in 2005 as well as becoming the treasurer for the chamber. Padilla agreed to do the books as long as Tim would attend the meetings. It is an incredible feat to not only manage the finances of the recreation center with its endless state-mandated audits, budget meetings and board elections but also the chamber budget. She seems to do it all with a standard of excellence that will be nothing short of impossible to match. Padilla will continue her dedication to the center by training her replacement, Nita Rohn, and  has offered to come back to Rangely to help during busy times and with more stressful parts of the job. Padilla and her husband Levi were both graduated from Rangely High School. After marrying, they moved to Denver for four years before returning to Rangely. They have two sons, Luke and Zach, both of Littleton, Colo. Zach is married to Jennifer and they have two daughters. Luke is married to Ashley and they have one girl and a baby due in October. Padilla and Levi have sold their home in Rangely and bought a new house in Littleton where they will spend time with their four grandchildren and renovate their new home. No doubt with four grandchildren under the age of 4 they will have plenty to fill their time.Padilla said, “This has been one of the best jobs around.” She has enjoyed the people she has worked with and the challenges that have come with the position. It is clear that the recreation center and the people involved with it have enjoyed and appreciated all of Padilla’s hard work and dedication to maintaining an outstanding facility for the public.It is with great gratitude for her work that they say goodbye to a woman who has been as much a part of the WRBM Rec. District as the recreation center itself. She has offered tremendous consistency, unmatched modesty and an ability to keep priorities in line as she established an incredible career history in Rangely and raised an outstanding family she will now thoroughly enjoy in her retirement. Congratulations and thank you to Paula Padilla for your outstanding service to the community of Rangely.

Blessed in the giving

Listen to this post MEEKER I “I love everything about it, helping families and knowing what we are doing is good,” Patti Arrington said about the Giving Tree project she helps spearhead.

Listen to this post The brilliant Maya Angelou said, “When we give cheerfully and accept gratefully, everyone is blessed.” These words are a perfect description of Meeker old-timers Dale and Emma Lou Frisby.

Listen to this post Temperatures outside have been cold recently but Ken and Betty Hayden offered a warm welcome to the Rangely home where they’ve lived for more than 50 years. Family photos, rewards from […]