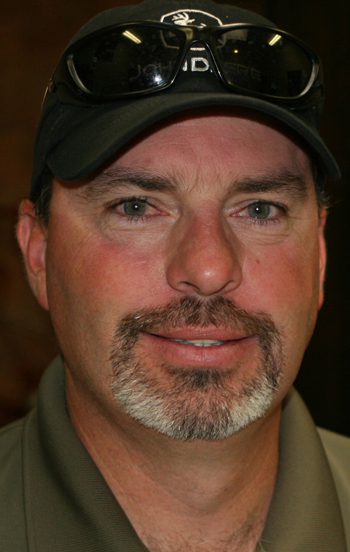 RBC – Shawn Bolton did it the hard way.
Bolton was the lowest vote-getter back during the Republican County Assembly in April and had to petition his way on to the ballot, with his name appearing last among the three Republican candidates for county commissioner.
But he came out on top during Tuesday’s primary election, though not by much.
“I was pretty much the underdog all the way across the board, because I got the fewest assembly votes and got the bottom line on the ballot,” Bolton said the day after the election. “So I was pretty much the one that was kind of bringing up the rear the whole time.”
Not on Tuesday night.
In fact, the primary results flip-flopped from the county assembly, where Wendy Gutierrez had been the top vote-getter with 23 votes and Pat Hughes had 14. Bolton finished with 12. Fifteen votes were required to automatically be put on the primary ballot.
Voting was close again between Bolton and Hughes, with a difference of only 12 votes, 583 to 571, in Tuesday’s primary. Gutierrez wasn’t far behind, either, with 542 votes.
County Clerk Nancy Amick said ballots in the county’s first bipartisan mail election would be canvassed, as required, but there wouldn’t be a recount.
“We cannot canvass until eight days out, by statute,” Amick said. “The secretary of state directs us how to do that. … But the spread was sufficient enough (not to warrant a recount).”
While disappointed in the election outcome, Gutierrez didn’t have any regrets about her campaign.
“I worked hard at it,” she said. “But I think a clear message has been sent in that people want to see regulations examined (a major theme of Bolton’s campaign message).
“I’m pleased for Shawn, and going forward one way or the other some things are going to change,” Gutierrez said. “I wish Mr. Bolton well.”
Hughes finished second in Tuesday’s primary, just as he did at the county assembly.
“It was a good race and it was good to see that many people involved,” Hughes said. “I knew it was going to be a close one. I thought everybody (the other candidates) did a good job as far as campaigning. It didn’t turn off as ugly as it could have been. I think the people should really feel like they do have a voice, because it was that tight of a race.”
Despite the closeness of the race, Hughes said there should be no doubt about the winner of Tuesday’s commission race.
“I saw the final results about 11:30 (Tuesday) night, so I called Shawn and congratulated him,” Hughes said. “As far as the Republican Party is concerned, I think we’ve got a clear winner and hopefully everybody rallies behind that.”
Voter interest in Tuesday’s primary election, which included two contested races – for commissioner and coroner – was high. And the numbers proved it. The turnout was a record for Rio Blanco County.
“We had 1,744 voters in 1994, and we had 1,940 people vote (in this primary election), so almost 200 more than our record, at least going back 20 years since I’ve been the clerk,” Amick said.
Amick was one of several Republican incumbents who appeared on the ballot unopposed and, who, barring opposition from a write-in candidate in November’s general election, will serve another term, beginning in January. They included County Treasurer Karen Arnold, County Assessor Renae Neilson, Sheriff Si Woodruff and County Surveyor Leif Joy.
Bolton, who will take office in January, replacing retiring commissioner Joe Collins, is a newcomer to the political scene. He moved to Meeker in 1996 and started his business – Bolton Fencing and Construction – in 2001. During the campaign, he spoke often about being the energy candidate and calling for a re-examination of county regulations and fees while encouraging a more pro-business attitude.
“We had a pretty wide variety of people who were pulling for us,” Bolton said. “But it would probably be safe to say (he received the energy vote). I know they’ve been looking for a voice.”
Bolton is grateful for the opportunity to be that voice.
“It’s a little humbling,” he said. “To think there’s that many people who put their faith behind you.”
n n n n n
In another close race Tuesday, gubernatorial candidate Scott McInnis was edged by Dan Maes, by a 51 to 49 percent margin, in the statewide Republican primary.
McInnis’ wife, Lori, is a Meeker native. The couple was in town Saturday for a campaign stop at the Rio Blanco County Fair and at a Ma Famiglia Restaurant.
“I have not heard from them,” said Lori’s father, David Smith, a Meeker rancher, the day after the primary election. “It’s not a good morning to be calling them.
“It seemed a lot of things worked against them,” Smith said. “They should have won that thing … but that plagiarism thing really hit him. … The Denver Post really blew that out of proportion. That’s the trouble with politics.”
Rio Blanco County voters overwhelmingly supported McInnis, 1,298 votes to 377 for Maes (75 percent to 22 percent). They also supported Tea Party candidate Ken Buck – who was in Meeker on Aug. 2 – in his race for the U.S. Senate against Jane Norton, 941 votes to 669 votes (54 percent to 38 percent). Buck won the statewide race and will face Democratic incumbent Michael Bennet in the November general election.

Listen to this post RBC I Around our country there is a movement to make sure that we are feeding our own children while we feed the world. It was good to find out that […]

Listen to this post CRAIG | The Colorado Division of Wildlife will host a youth ice fishing event in Craig on Saturday from 1-4 p.m. at the Little Rascals Pond (800 West First St.). All […]