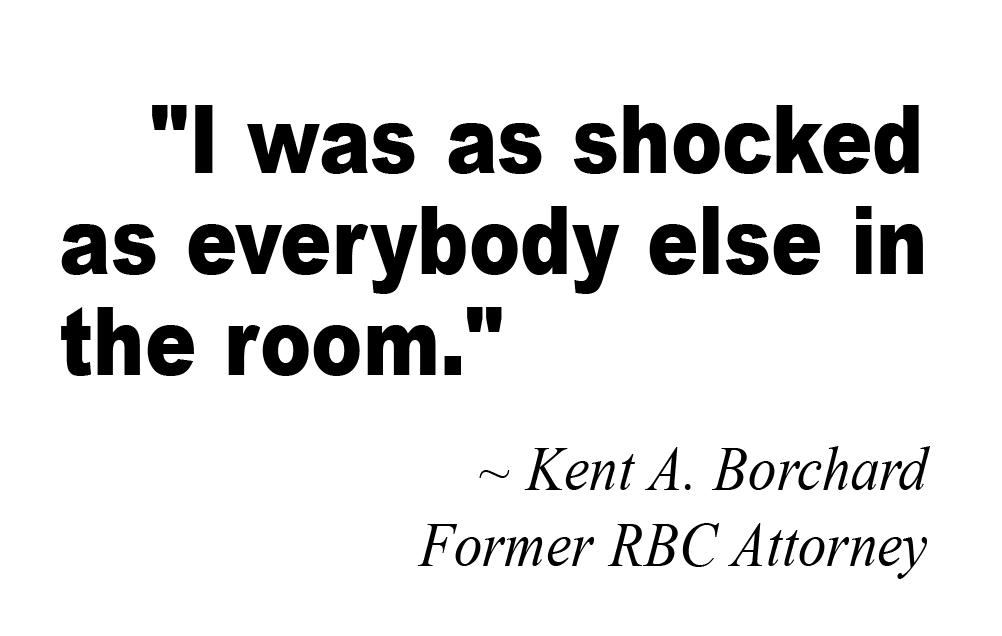 RBC | What started as a typical county commissioners’ meeting with newly elected Commissioner Gary Moyer, returning Commissioner Si Woodruff and newly appointed Board Chair Jeff Rector at the helm, turned into something of an event as the meeting progressed, leaving many in attendance scratching their heads about what they had just witnessed.
During the business portion of the agenda involving the reappointment of various county positions—including County Attorney Kent A. Borchard, County Finance Director Janae Stanworth, County Road and Bridge Director Dave Morlan and County Director of Human Services Barbara Bofinger—Woodruff had started to make the motion when Rector asked Woodruff to read each one individually for separate votes, starting with the appointment of County Attorney Kent A. Borchard. Commissioner Moyer seconded the motion and Borchard’s reappointment was taken to a vote. Woodruff voted for and Moyer and Rector voted against appointing Borchard for 2019. Borchard appeared to be taken aback, along with others in attendance. He later told the HT that he was hurt and “as shocked as everybody else in the room.”
Borchard, who has been the county’s attorney for 10 years, was planning to retire at the end of 2019. He said he was looking forward to training the new hire who was budgeted to take over most of the Department of Human Services (DHS) cases to help free his time for other county business. Currently there are 10 local Department of Human Service cases and one court of appeals case for which Borchard is the attorney, with two of those cases scheduled to be in court this Friday.
Asked what the plan is for replacing Borchard, Rector said, “We’re putting a contractual attorney in place in the next couple of days, and then we’ll go through a process and take the next steps.”
Borchard said he is ethically obligated to continue these court cases and there would have to be a motion in the court to remove him as the attorney if it comes to that. As it stands now he will have to handle those cases on a contractual basis if that’s something the commissioners will entertain.
Asked what’s going to happen to the 10 DHS cases and the children involved in those cases, Moyer said the commissioners will find a contractual attorney and that, “Anybody is replaceable.”
Asked why the change was handled in this way and Borchard was not made aware of their plans, or given the option to retire early, Rector and Moyer responded that it was a “clean cut” this way.
“We knew he was planning to retire, and we decided it’s time for a change,” Rector said. Moyer added that he felt there were things that were more of a priority with federal land issues and that every elected official has an expectation of their staff to be on board with what they are trying to do.
Woodruff, who voted in favor of Borchard’s reappointment, asked his fellow commissioners later during the meeting if he understood correctly that they “just didn’t reappoint Borchard?” Moyer responded with, “That is correct.”
Later asked for comment on what had transpired, Woodruff said, “What was done was foolish. There was no thought put into it. It was very disrespectful and rude. And we three commissioners represent an entire county. I think what happened is some people made some decisions and didn’t understand the role of the county attorney. It’s DHS, it’s easements, it’s other day-to-day legal matters. This is not what we were elected to do. We’ve got 10 little kids that we are supposed to take care of.”
Woodruff further specified that he was not aware of any previous discussion about not appointing Borchard and stated that the main issue with dismissing Borchard in this way is whether the county will be able to find a full-time local attorney they can employ, or if they’ll be limited to someone who is only available by phone, “at $300 an hour.”
The county submitted a help wanted ad including an attorney position to the HT on Tuesday.

Kids can shine as video-journalists

A bill has been passed that when private property owners sustaining damage from wildlife ask for help from the Colorado Division of Wildlife (DOW), the DOW is required to respond.