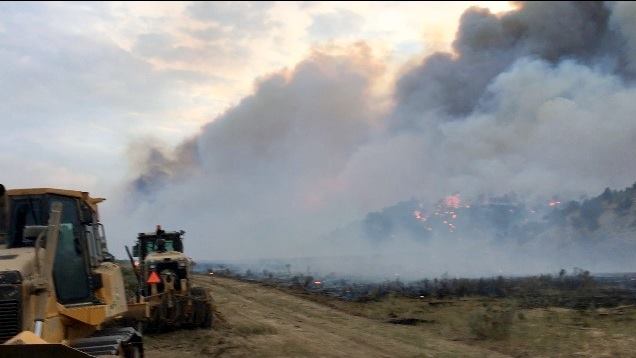 The Fawn Fire was started by lightning and is currently burning on BLM and private lands near County Road 29, about 30 miles southwest of Meeker in the Piceance Basin. It has grown from 450 acres as of 6:53 p.m. Sunday to 1,065 acres Wednesday morning according to Inciweb (https://inciweb.nwcg.gov/incident/5906/). The fire was 90 percent contained as of Wednesday and listed as 100 percent contained the next day.

Fire retardant drops by two heavy air tankers (C-130 MAFFS from Colorado Springs) took place Sunday morning. Planned operations include further burnouts supported by aircraft, engines and firefighters on scene. According to RBC Sheriff’s office, “More than 100 firefighters worked with two heavy air tankers and four single-engine air tankers yesterday (Sunday, July 8) … which is burning in pinyon-juniper in a rugged, remote area of the Piceance Basin about 30 miles southwest of Meeker. No structures are immediately threatened. Firefighters will continue focusing their efforts on burn out operations, containment lines and patrolling the fire’s perimeter.”

MEEKER I Recent snow in the Flat Tops Wilderness has cooled much of the Lost Solar Fire, enabling the White River National Forest to lift the safety closure that has been in effect since mid-September.

MEEKER | A human-caused wildfire was reported early Saturday afternoon at the end of County Road 121 in the Hamilton area. Multiple agencies responded to the blaze, which threatened multiple structures on private land. As […]

MEEKER | According to a BLM news release, firefighters from the Northwest Colorado Interagency Fire Management Unit are closely monitoring the 5-acre Hunt Fire about 26 miles southwest of Meeker in Rio Blanco County. The […]