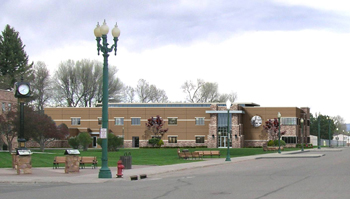 RBC I County commissioners’ first choice for the location of a justice center would be downtown, next to the courthouse, on the site of the Meeker Elementary School, which will be closed at the end of the school year.
“It makes good use of that space down there,” said Commissioner Kai Turner of Meeker. “(Putting a justice center in the location of the grade school) would probably be the most fiscally responsible thing we can do, as far as taxpayers go. I think that makes more sense.”
But that doesn’t mean commissioners aren’t considering other locations.
“We’ve made an agreement to go ahead and do site selection based on four sites, one of which is the elementary school location,” said Commissioner Ken Parsons of Rangely.
Eventually, it will be up to the Meeker Town Board to decide the fate of the grade-school building and the future use of the site, which is prime downtown real estate.
When the school district vacates the old elementary school — construction on a new building will be completed next spring — the property on Main Street will revert back to the town, which has been leasing it to the school district for $1 a year.
Some residents in the area have said they oppose the proposed idea of having the site used for a justice center.


“It’s not our intent to cause a big turmoil downtown,” said Commission Chairman Joe Collins of Meeker. “What we’re trying to do is our due diligence, because, at some point, this jail is going to have be fixed.”
Town Administrator Sharon Day said residents will have a say in what happens with the school building, which was built in 1939, and the future use of the site.
“The town will have it go to a ballot issue in April,” Day said. “The determination of the ballot language will be based on what (the town board) decides will be the best use of the building. They will be asking the public to approve whomever they decide to deed the building to. The board will not make that determination without a lot of public input.”
The town board will entertain public presentations on the future use of the grade school building and site at a meeting Oct. 6 at Town Hall.
“Yes, the county is planning on making a presentation to the Meeker Town Board and any interested citizens on the potential location of the new justice center,” County Administrator Pat Hooker said. “Tentatively, we hope to present two or three potential location options for the new justice center/courthouse, associated costs of each alternative site, and pros and cons to each site, from the county’s perspective.
“Our preferred site is still the elementary school site, and we believe looking at alternative sites and supporting data/analysis will help the town board and citizens understand why we believe this site is best for all concerned,” Hooker said.
In June, the county made a presentation to the town board about its proposal to put a justice center at the school site. Colorado Northwestern Community College has also expressed an interest in the building to expand its Meeker Center.
“This is not something that’s going to happen tomorrow,” Commissioner Collins said. “What we’re trying to do is put some kind of a plan in place, so that … we can say, yeah, we’ve done some due diligence and here’s where we are. We’re not going to go out and tax people tomorrow to build a justice center. That’s not our intent.”
While the current jail is already located in the upper level of the courthouse, neighborhood residents worry about what a new justice center would do to home values in the area.
The current jail can’t keep up with the demand — prisoners are often transported to be housed at other jails in the area, which is expensive — and it would be costly to remodel in order to be brought up to code, county officials say.
“The fact we already have a jail in downtown Meeker has been a fact for many, many years,” Collins said. “During the sheepdog trials, the courthouse lawn was full of people, and we’ve got a jail up there, and I don’t think anybody thinks about it.”
Commissioners said there is is an economic consideration that should be included in the discussion about where to build a justice center.
“Part of our concern about downtown Meeker is if we start moving the core out of the town, it’s going to affect the businesses downtown,” Collins added. “I’m not going to go 20 years from now and have somebody say, ‘Well, the county commissioners moved the justice center out of downtown Meeker, and now we’ve got plywood on the windows.”
Still, because of opposition to the grade school location, commissioners are looking into other possible sites.
“We’ve seen there is some reluctance to build such a center (at the grade school site),” Commissioner Parsons said. “A second site (being considered) is putting (the justice center) on the courthouse property. We had a preliminary design that would put it behind the existing courthouse … since we own that site.
“And we’re going to look east of town and west of town, so we can get the full assessment,” Parsons added. “I think the cost would be considerably more expensive there (outside of town), because of the lack of infrastructure. It would cost our taxpayers a lot more money, but those would be alternatives to maintaining our court system downtown.”
While the public debate will be ongoing, and commissioners will study various sites, the old grade school continues to be their first choice for a justice center location.
“That makes more sense to have two buildings right next to each other, with the old courthouse that’s now there being the county administration building,” Commissioner Turner said.
Commissioners said they received a favorable response after an architect’s rendering of the proposed justice center was published in the Herald Times. They said it helped for people to see what the justice center would look like.
“I had a lot of positive feedback and, in fact, from some of the people who were totally against it before,” Turner said. “A picture’s worth a thousand words sometimes.”

We are looking for information concerning rural schools in Rio Blanco County. Items needed: 1. Interesting facts 2. Stories about the school 3. When established

MEEKER I Jim Fay, founder of The Love & Logic Institute and author of the best-selling book “Parenting with Love & Logic,” will present a half-day workshop Saturday, Oct. 2, at Rifle High School from […]