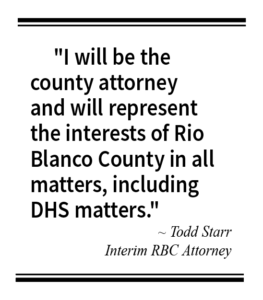 Discussion about the county attorney’s position and how to fill it was part of a work session prior to the regular meeting. Workshop schedules are not published in the HT and are not being recorded by the county, they’re only available on the county’s website at http://www.rbc.us/186/Board-of-County-Commissioners. During the workshop, the board discussed needing to add a job description to the attorney’s position on the website, how long to post it, and how to deal with the obligations in the interim.

“My thought is to contract Todd for a while and see where that brings us,” said Commissioner Jeff Rector.

“We don’t want to get in a big rush to hire a full-time attorney as an employee,” said Commissioner Gary Moyer. “The item at hand now, is dealing with it now until we get someone on board full time. My idea being we’d use Todd as that interim while we get through this process. My understanding is as far as Kent is concerned, he will fulfill his legal and ethical obligations until he is released by a judge, and at that point, Todd would do that work.”

“When there’s a court case filed we have to get a judge’s permission to withdraw,” Starr said. “Ordinarily there would be a form for substitution of council.”

“What I was told is that in social services cases they typically want that attorney to finish, so we did an emergency agreement with Kent last week,” Woodruff said.

In a memo sent to the commissioners by Borchard, the former county attorney stated, “I am especially concerned about representation of the Department of Human Services and the handling of child welfare cases. During the time I have been county attorney, I have worked with caseworkers and their cases on an almost daily basis. The scope of work in the contract you signed with me on [Jan. 17] lists the many requirements the department has for representation by attorneys in Glenwood Springs who would be interested in applying for the job of representing Meeker for court on a regular basis. I know all four of these attorneys well and have worked with them for many years. I can highly recommend any one of them… I urge you to meet with Department Director Barb Bofinger and casework supervisor Michelle Reese and get their input before you make any decision as to futue legal representation for the department.”

If the judge signs the order, Starr will immediately take over those cases.

Starr has a wide range of experience. Via email he wrote, “I have twice served as interim county administrator, and I have held the ‘interim’ title on five occasions, including directing the finance, planning and human services departments. I have been the county attorney for two different counties (Dolores and Archuleta) for nearly a decade each. Finally, I have represented towns and counties for the last 20 years with an incredibly successful track record. I serve on the board of the Colorado County Attorney’s Association and am a frequent lecturer on legal issues facing counties and commissioners.”

While Starr does not plan to relocate to Rio Blanco County, he said he intends to be an active member of the community.

“I intend on being present at the vast majority of BOCC meetings. Right now, it appears the biggest impediment to that will be scheduled court appearances for DHS cases. (for example, I will probably miss next Monday’s BOCC meeting due to a 12:30 DHS hearing) I will be the county attorney and will represent the interests of Rio Blanco County in all matters, including DHS matters.”

The commissioners approved Starr’s contract in a two to one vote during the regular meeting, with Moyer and Rector approving and Woodruff opposing the motion.

Commissioners discussed plans for the next anticipated Anvil Points payment of more than $400,000 during the work sessions. Road and bridge projects top the list of needs where the money could be applied.

The regular board meeting was adjourned at 11:35 a.m.

Letter to the Editor: Hill thanks voters

Dear Editor: I would like to take this opportunity to thank everyone who voted for me in the primary election. At the same time I want to thank all the voters, as you have exercised […]

RBC | Colorado House District 57 Rep. Perry Will was in Meeker Tuesday for the regular Board of County Commissioner meeting. Will, appointed to the office in early 2019 to replace Bob Rankin, who was appointed […]

RBC | Rio Blanco County Commissioners revisited an unresolved problem with flooding on the properties surrounding the Meeker Airport Monday. Since the airport update was completed, property owners below the airport have reported repeated trouble with […]