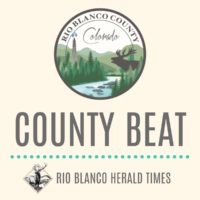 RBC | The county has contracted with an additional attorney to handle Department of Human Services (DHS) cases. Attorney Donald Steerman’s contract with the county, “not to exceed $10,000 a month,” was approved Tuesday during the Rio Blanco County Board of Commissioners meeting. According to the county’s disbursement reports, Steerman was paid $17,125 in October and $12,119 in November for services rendered. According to RBC Finance Director Janae Stanworth, about 80% of DHS-related legal expenses are “backfunded” by the state.

The county has experienced a surge in DHS cases (https://www.theheraldtimes.com/families-deserve-better/rio-blanco-county/). When the board canceled former county attorney Kent Borchard’s contract last January, Commissioner Si Woodruff and Borchard both expressed concern about the DHS caseload, which primarily includes child welfare cases. Attorney Todd Starr, whose contracted with the county for an amount “not to exceed $11,500 a month,” was confident in his ability to handle both county business and DHS cases at the time.

According to county records, Starr’s legal firm, Cunningham Swain, has received $101,413 from for his services through October 2019. If that amount includes February 2019, that’s an average of $11,268 per month.

It is unclear how, or if, the addition of Steerman’s contract will affect Starr’s contract.

According to the county’s salary report, Borchard was paid $139,325 in 2018 for his services as the county attorney, which does not include benefits, for an average of $11,610 per month.

The commissioners also approved a resolution for a supplemental budget of $4.2 million “appropriating additional sums of money to defray expenses in excess of amounts budgeted, in the various funds and spending agencies.” The supplemental budget accounts for grants, severance tax funds and Anvil Points funds received during the year as well as additional expenses incurred in 2019.

The commissioners were scheduled to approve the 2020 budget at a public meeting Wednesday after press time.

The board also approved resolutions canceling taxes and interest on three personal property accounts from 2015 deemed “unpaid and uncollectible” for Razz Tavern and Grill, Ace West Trucking and Nation’s Fund I, LLC. Nation’s Fund, which reportedly owed $12,445 in taxes to the county, was named in an article (https://patch.com/connecticut/norwalk/214-million-secured-norwalk-ct-nations-equipment-finance) last month as the recipient of a $214 million revolving line of credit from Citizens Bank to be “used to support future growth.” The other two accounts were less than $500.

All three commissioners attended the Colorado Counties, Inc. conference in Colorado Springs in November, which they described as “excellent” and “informative.”

Commissioner Jeff Rector is still working with the Western States Tribal Nation group to attempt to connect pipelines in Piceance Basin to a coastal outlet for exporting natural gas, but said the group “flipflopped on me a little bit,” and has been talking about the Permian Basin gas fields.

He’s hopeful that a trip next week to Alberta, Canada will be fruitful, saying the Canadian government reached out to the Tribal Nation group.

“Hopefully we can get [natural] gas driven out of this area,” he said. “That one little project would fix a lot of things.”

The board went into executive session “for the purpose of receiving legal advice on specific legal questions and relating to existing contracts and agreements that may be subject to negotiation or to develop a strategy for negotiations.”

The next meeting for the commissioners is Tuesday, Dec. 17 at 11 a.m. in Rangely.