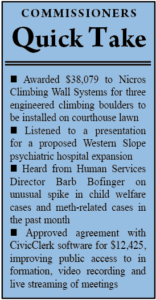 RBC | Generations of kids have scrabbled up the giant rock on the courthouse lawn. In a few months the familiar boulder will be joined by three fiberglass cousins, ranging in size from 5 feet to 9 feet tall, designed specifically for climbing fun.
Monday the board of county commissioners awarded a $38,079 bidto Nicros Climbing Wall Systems for the installation of three engineered climbing boulders on the courthouse lawn.
The boulders are an alternative to the water feature originally planned as part of the courthouse remodel. Half of the cost is provided through a Department of Local Affairs grant, and the other half was budgeted in the courthouse remodel.
In workshops Monday, the commissioners heard from Tish Starbuck, speaking for Mind Springs Health, regarding a capital fundraising campaign to double the size of the nearest psychiatric hospital on the Western Slope.
“Every day we experience the moral distress of citizens of Western Colorado needing a psychiatric bed and not having one because they’re full,” Starbuck said.
Any pledges or commitments made between now and the end of the year will be matched by a $2 million challenge grant set up by two Roaring Fork Valley philanthropists.
The commissioners asked Starbuck to speak with the towns and then come back before the board.
Commissioners also heard from Human Services director Barb Bofinger, who said the department has had an unusual number of cases in the last few months.
“Child welfare is the busy program right now. It feels like we’ve had a spike,” she said, noting that the last weekend was the first one where staff didn’t have to go out on an emergency call. She also noted what seems to be an increase in the number of meth-related cases in Meeker.
In other business, the board approved an agreement with CivicClerk software for $12,425 for the first year, with maintenance fees of $9,600 in following years. The software will improve public access to agendas, minutes, and other county business, as well as offering live streaming and video recording of meetings.

Guest Column: Being an advocate for your child’s mental health

Listen to this post RBC | Although statistics vary, the American Psychological Association approximates one out of every five children in America has a diagnosable mental health disorder. Mental health problems in young people are associated with […]

In the wake of furloughs, closings, suicides, a mountain town businessman searches for balance

Listen to this post BRECKENRIDGE | Dick Carleton came to Breckenridge from Virginia when he was 24. He had a business degree from Virginia Tech, a ‘69 Volkswagen bug, $100 and three friends willing to […]

Listen to this post Rangely |  Mental health first aid training will be held Wednesday, March 28 from 8:30 a.m. to 5 p.m. in the CNCC Weiss Conference Room at 500 Kennedy Dr. in Rangely. […]