MEEKER | The Colorado State Track meet was held in Lakewood, Colo., this past weekend, May 17-19. The Meeker Cowboys had an excellent meet with many of the athletes scoring points for the team.

Jake Shelton was the lone discus scorer for the Cowboys. His throw of 132 feet 5 inches earned him sixth place overall. Although not a personal best throw, it was close. Shelton was the only sophomore on the podium for the discus in 2A. The Cowboy pole vaulters had solid days as well. Freshman Colby Clatterbaugh “gained valuable experience at the state meet,” said coach John Strate. Clatterbaugh cleared 10 feet 8 inches.  Sophomore Tevin Pelloni hit a new personal best at 11-8, 4 inches above his personal best.

“It was a highly competitive field this year.” said Strate. “Last year 11-8 would have put Tevin on the podium.”

The boys 1,600-meter relay of Tannen Kennedy, Spud Kent, Jeremy Woodward and Andy Kracht ran a season best time of of 3 minutes 38 seconds. They tied for the 18th spot  to qualify for the state track meet and finished 14th overall. “It was great to see Jake get on the podium,” commented Strate, and “The future looks really bright for the entire boys’ team, as each of the state qualifiers will be coming back next year.”

Weather played a little more a of a factor overall in the girls competition due to them having multiple events on Saturday. “The girls had an excellent meet,” said Strate, “Everything went as expected early on in the meet.” The 4×200-meter relay of Sierra Williams, Kirsten Brown, Sydnie Main and Gracie Bradfield qualified for the finals, and Bradfield qualified for the 200-meter sprint and 400-meter run finals comfortably.

On Friday junior Kenzie Turner had an excellent day in the pole vault; clearing 9 feet 5 inches. Turner broke her own school record by more than a foot. Turner’s new record earned her fourth place honors, and valuable points for the team. “Kenzie has put so much time and effort into the pole vault it was the highlight of the day to see her on the podium,” said Strate.

Megan Shelton and Main also scored points for the team in the shot put finishing seventh and eighth respectively. Strate commented, “In the shot Sydnie had come into the meet in 17th place, so for her to take eighth was excellent.” Main had a very busy couple hours in which she had to go back and forth between the pole vault and shot put. Almost immediately after finishing the shot put and pole vault Main ran in the finals of the 4×200 relay with Bradfield, Williams and Brown. They took fifth overall with their time of 1.50:16 seconds.

Senior Williams also had a big day. She competed in the open 800-meter run 40 minutes before the 4×200 relay. “I was really proud of Sierra,” Strate said. “She has been battling a sore hamstring all week, but she really pushed through when we needed her to.” The girls 4×100-meter relay team of Williams, Bradfield, Brown and Shelton also ran on Friday, qualifying for finals on Saturday.

Saturday morning brought rain to Lakewood just as the forecast  called for. Shelton and Main did not let the rain stop them from their goal of finishing first and second in the discus at the big show. In the preliminary rounds of the discus competition the bad weather and rain had left standing water in the ring.

“The exciting part for us was we are not strangers to performing in poor conditions. Both girls were excited going in as they felt they were prepared to compete in the rain,” Strate said.  Both Shelton and Main made finals; Shelton sitting second and Main in fourth. Finals are set so that they compete in the order in which they qualified. On the last throw of the finals Main took the lead with her new school record of 120-8. Two throwers later, Shelton busted one out to 124-9 and was crowned 2018 state champion and holder of the new school record. Shelton and Main had been going back and forth all year with longest throws. Each had been consistently throwing more than 120 feet in practice.

“When it counted the most both of them threw their best,” said Strate, adding, “Throwing coach Greg Cravens did an excellent job of preparing both girls for the high pressure situation.”

The scoring for the lady Cowboys did not stop with the field events. On the track Bradfield broke her own school record in the 400 meter run with her time of 59.29 seconds, which saw her on the podium taking second place. 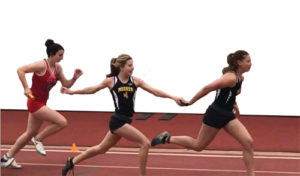 “Bradfield ran an excellent race,” said Strate. “She had made the 400 her focus race this year.”  The field in the 400 run was highly competitive as it had the returning state champion, as well as the runner up from 2017. Bradfield also placed fifth in the 200 meter sprint later in the day.  The 4×100 relay team of Williams, Bradfield, Brown and Shelton, which qualified for the meet in 14th place, ended up taking fifth. Overall the girls’ team finished fourth in the state scoring 51 points, just one point out of third.