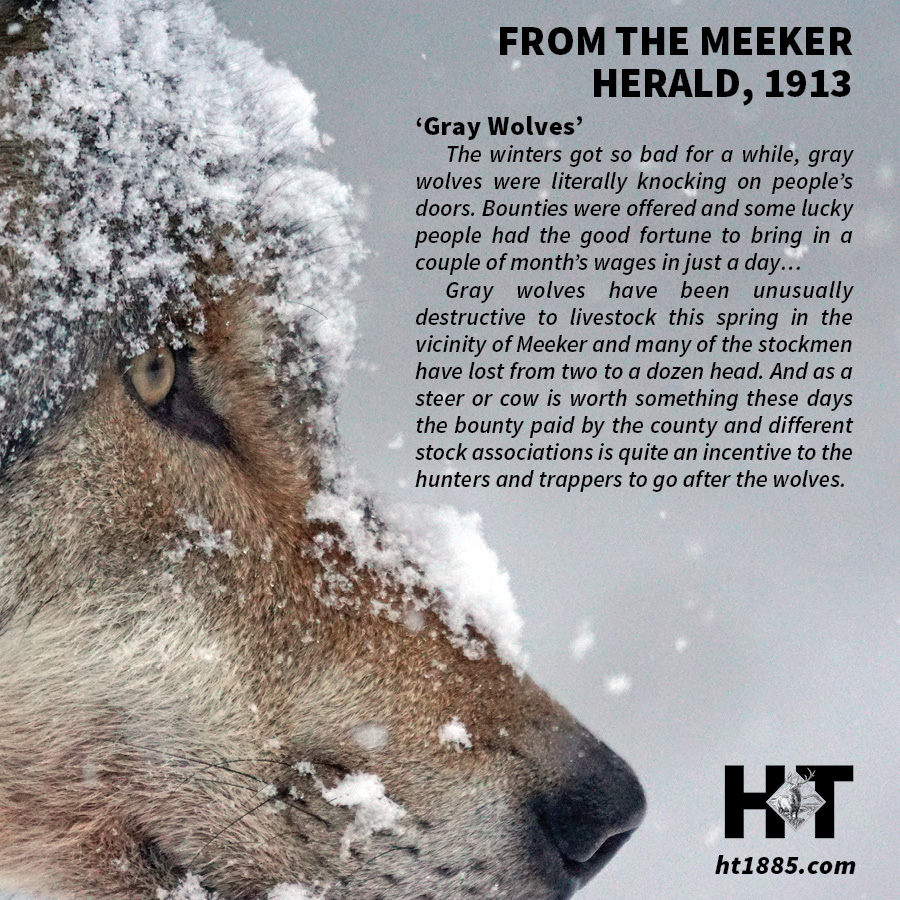 Gray Wolves
The winters got so bad for a while, gray wolves were literally knocking on people’s doors. Bounties were offered and some lucky people had the good fortune to bring in a couple of month’s wages in just a day…
Gray wolves have been unusually destructive to livestock this spring in the vicinity of Meeker and many of the stockmen have lost from two to a dozen head. And as a steer or cow is worth something these days the bounty paid by the county and different stock associations is quite an incentive to the hunters and trappers to go after the wolves.

The Meeker Herald
125 years ago

– A Lay correspondent says that about 30 outfits have been up on Elkhead recently slaughtering elk in a shameful manner, and a game warden hasn’t been seen in that section since last spring — when elk meat wasn’t fit to eat and no one desired any. If is the same old story, and if the present legislature does not make a radical change in the game laws there will be no necessity for further legislation two years hence.
– Ranches are still on the rise. The latest purchaser on the river is County Assessor Jim Hayes, who has bought the old Attix ranch from G.S. Allsebrook, paying a good round figure therefore.

The Meeker Herald
50 years ago

– Forrest Nelson, who has been featured in several magazines and is widely known for his sheep breeding program, will be assisting with the college judging of sheep and taking reasons from the college students at the annual National Western Stock Show.
– Jay Rector, county commissioner from Rangely, was named chairman of the Rio Blanco County Board of Commissioners Tuesday afternoon.
– There is a real sense of pride in paying taxes in these United States. Most of us could be just as proud though, for half the money.
– A large number of county residents plan to take in at least part of the stock show and wool conventions in Denver this coming week.

The Meeker Herald
25 years ago

– Snow isn’t unusual hereabouts, but the 13-inch Monday morning surprise was just a bit out of the ordinary because of the relatively large buildup in such a short time. The 13-inch figure is strictly unofficial, based on snowfall amounts readers reported to The Meeker Herald. Officially, the snowfall translates to .52 inches of precipitation, according to the Bureau of Land Management office in Meeker. We need even more snow.

– The BLM held a hearing last Thursday on proposed changes in the White River Resource area. From an industry standpoint, new exploration in Rio Blanco County would be adversely affected. Also at risk are hunting and recreation opportunities.
– Rangely District Hospital is pleased to announce that Debra L. Freeman has successfully completed the California College Health Sciences’ Respiratory Technician curriculum.

The Meeker Herald — 125 years ago • Monday evening’s ball in honor of Washington’s birthday was a very successful affair. • Harry Gilmore did a very artistic job of painting and graining Tom Little’s new saloon. […]

The Meeker Herald — 125 years ago – Simp Harp, the genial manager of the Meeker Hotel, was the busiest man in town last week. The French glass recently arrived from Denver has been placed […]

The Meeker Herald 125 years ago • After several days spent in the western end of the county and ont he border, State Game Warden Land, Sheriff Wilber and Deputies Smith, Withington and Rich have […]