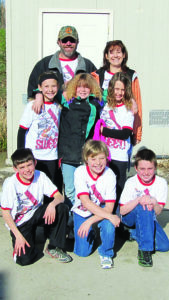 The Destination Imagination team of Six Brains are Better Than One, finished second at the state competition and will now represent Meeker Elementary School at the International Global Finals, in Knoxville, Tenn. The team is coached by the brother and sister team of Travis Day and Marnell Bradfield. Middle row: Gracie Bradfield, Kenzie Turner and Lila Klinglesmith. Front row: Kale Burke, Charlie Day and Pake Burke. Courtesy Photo

Eight Meeker teams participated in the Destination Imagination Western Slope Regional Tournament March 26 in Rifle.
Meeker had three middle school teams, four elementary teams and one rising stars team. They represented Meeker well and six teams were able to progress to the state tournament in Denver throughout the weekend.
In Denver, each team competed against 20-30 teams from across the state in their different challenges, along with competing in an instant challenge (completing an unknown task or performance in 4-6 minutes). Meeker had two teams take on the structure challenge where they made a structure out of wood, aluminum foil and glue that could support weight, along with performing a skit about a foiled character. The Snack Attacks placed sixth in the elementary division and the Do-Rights and Do-Rongs placed fifth in the middle school division.
The JAMDUELS Myth Freaks took on mythical creatures in the improvisational challenge and placed eighth in the elementary division. Meeker’s elementary team, the Cookoo Coconuts, placed ninth with their performance about the water cycle in Spinning a Tale, a three-act circular story about an energy cycle.
The final challenge involved developing equipment that could move objects off and on a six-foot tower (elementary division) or a nine-foot tower.
The Seven Super Shmorgies placed eighth in the middle school division and Six Brains are Better than One placed second in the elementary division. With their second place finish, Gracie Bradfield, Lila Klinglesmith, Kenzie Turner, Pake Burke, Charlie Day and Kale Burke, along with their team managers Marnell Bradfield and Travis Day, qualified for the Global Finals, in Knoxville, Tenn., the week of May 25. They will represent Meeker and ­Colorado against teams from around the world. We wish them the best of luck!

MEEKER I Meeker fans will have their first opportunity to view the 2010-2011 hometown men’s basketball team as the Cowboys host the White River Electric Cowboy Shootout. In its 11th year of sponsorship by White […]

MEEKER I It’s a stretch to compare the Sports Illustrated cover jinx to the Colorado Preps. However, as far as the Cowboys varsity football is concerned the two may be in tandem.

MEEKER I Martinez Western Constructors, the contractor awarded the bid for the Ute Road Project, are days away from beginning the project.