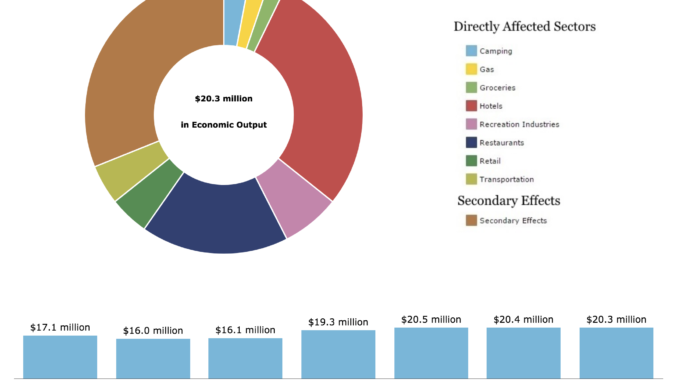 DINOSAUR | A new National Park Service (NPS) report shows that 304,468 visitors to Dinosaur National Monument in 2018 spent $18.3 million in communities near the monument. That spending supported 222 jobs in the local area and had a cumulative benefit to the local economies of $20.3 million.

“Dinosaur National Monument welcomes visitors from across the country and around the world,” said Superintendent Paul Scolari. “We are delighted to share the story of this place and the experiences it provides. We also feature the park as a way to introduce our visitors to northeast Utah and northwest Colorado and all they offer. We appreciate the partnership and support of our neighbors and are glad to play a role in helping to sustain local communities.  Beyond our region, national park tourism is a significant driver in the national economy, returning $10 for every $1 invested in the National Park Service.”

The peer-reviewed visitor spending analysis was conducted by economists Catherine Cullinane Thomas and Egan Cornachione of the U.S. Geological Survey and Lynne Koontz of the National Park Service. The report shows $20.2 billion of direct spending by more than 318 million park visitors in communities within 60 miles of a national park. This spending supported 329,000 jobs nationally; 268,000 of those jobs are found in these gateway communities. The cumulative benefit to the U.S. economy was $40.1 billion.

To learn more about national parks in Colorado and Utah, and how the National Park Service works with communities in these states to help preserve local history, conserve the environment, and provide outdoor recreation, go to www.nps.gov/colorado or www.nps.gov/utah.

For general information on Dinosaur National Monument, please visit our website at www.nps.gov/dino or call us at (435) 781-7700. You can also look for DinosaurNPS on social media.

About the National Park Service:

With the start of Dinosaur National Monument’s river permit lottery on the National Recreation Reservation System last year, more changes are coming for 2015. Applicants who successfully secure a launch will now confirm their acceptance […]

DINO I Monument staff, volunteers and community partners will host an open house from 10 a.m. to 2 p.m. on Saturday at the historic homestead of Josie Bassett, found at the end of Cub Creek […]

DINOSAUR I The celebration of Dinosaur National Monument’s 100th anniversary culminates this weekend with a variety of events. Entrance fees will be waived Saturday and Sunday to welcome everyone to join in the festivities and […]