In Native American culture, the buffalo is sacred. That’s why the donation of a buffalo by the Northern Ute Tribe — for a meal during Meeker’s Smoking River Pow Wow in September — is such a symbolic gesture.
“The buffalo is a sacred animal to most Indian tribes,” said Bill Kight, chairman of the powwow committee. “What makes this buffalo special to us is the head will be used for the sun dance next year, in 2010. A buffalo head is normally used at the center pole at the sun dance. So donating an animal to us that will be used in the sun dance is a double honor.”
Lynn Lockwood, another powwow committee member, added, “We are very honored the Northern Ute Tribe has chosen to give us a buffalo for a traditional feast at the powwow, and we are excited that they are contributing funds for a hand game tournament. The hand game players will add a lively element to the powwow.” 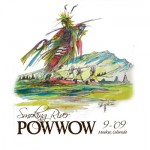 RBC — Precipitation at the plant center in February measured only 0.30 inches and includes 3.5 inches of snow.

As winter approaches and Colorado residents and tourists begin to make their regular trips to the Rocky Mountains along the I-70 corridor, the Colorado Department of Transportation (CDOT) would like to remind them to drive […]

Letter: Fishing is Fun Day was a success

The Colorado Division of Wildlife would like to thank its community sponsors for Fishing is Fun Day: Watt’s Ranch Market donated all of the groceries for the lunch, which was provided to all of the […]