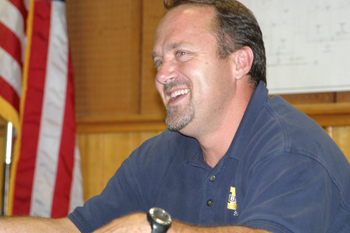 MEEKER I Doug Pfau was used to doing a lot of things himself.
Moving up to a bigger school district, he’s finding, has its advantages.
“There’s a lot more support staff here,” said the first-year Meeker school superintendent, who replaced the retired Dan Evig. “It’s a lot nicer to have more resources. I had one principal there (at De Beque). Now I have three. Now, when I want something done, I don’t always have to look in the mirror and say, ‘You need to get that done.’ A lot of the hats I used to wear, I now have someone here who does that. I have to keep asking, ‘Now, do I do that?’ I don’t want to step on anyone’s toes.”
But a bigger district also has its challenges.
“It’s easier to communicate with yourself,” Pfau joked. “It takes more effort to communicate here, to get buy-in to what you want to get done.”
Pfau has seven years of experience as a school superintendent, all in Colorado. He was superintendent in Grover for four years, and then, most recently, he was superintendent in De Beque for three years.
As far as the responsibilities of a superintendent, Pfau is in familiar territory. What’s different — and exciting — about the Meeker job is the $24 million construction project, which includes a new elementary school scheduled to open next fall and renovations to the middle school and high school.
“I’m familiar with the routine of being a superintendent. There’s not really much different from what I was doing before, other than the construction project and catching up on the information about all of the things that had been decided, and then the new things they want input on,” Pfau said. “But it’s real exciting.
“I’ve just tried to get familiar with the projects at each building,” he added. “The elementary school is by far the biggest one, but I wanted to know what work was going on at the two other schools.”
Both the middle school and high school are scheduled to be ready before the time school starts Aug. 24.
The new elementary school is expected to be completed next spring.
“It’s amazing how fast it goes up,” Pfau said.
Even though he’s new to the Meeker community, Pfau jumped right in coaching youth baseball this summer. And he already knew a number of the Meeker administrators and coaches from being involved in school and athletic circles around Northwest Colorado.
“I was very familiar with the area,” Pfau said. “But I’ve been getting to know everybody on a personal level.”
Pfau and his wife, Meg, have three children who will attend Meeker schools.
“I’ll have one at every school,” Pfau said.
Daughter Cody, 14, will be a freshman at the high school. Son Zane, 12, will be a seventh-grader at Barone Middle School. And son Wyatt, 8, will be a third-grader at the elementary school.
Wife Meg will also be in the school district, teaching technology and business at the high school. She previously taught at Grand Valley High School in Parachute.
“People have been very open,” Pfau said of the reception in Meeker. “Everybody has been great. It’s been a real positive experience. Of course, that will change the first time I tell somebody something they don’t want to hear. But that’s the job.”

MEEKER I Meeker Fire and Rescue held its annual banquet Friday at the Fairfield Community Center. Awards that were presented included: • Employer of the Year: Meeker Collision Center. Wade Bradfield has two employees who […]