RBC — Sealed items not damaged in the May 23 fire that shut down Meeker Drug will be sold during a sale Friday and Saturday on the courthouse lawn. 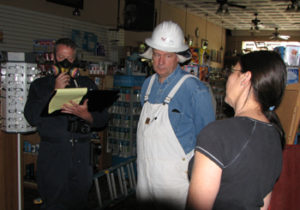 In the meantime, arrangements have been made to transfer prescription records to the City Market pharmacy in Craig, which will be available at City Markets throughout Colorado.
And Meeker Drug owner Linda Blagg is moving forward with plans to restore the interior of the business, housed in a building dating back to 1914 and located in Meeker’s historic downtown district.
Blagg is also looking into the possibility of using a temporary location to reopen the drugstore.
“There are a couple of spaces I’m looking at,” Blagg said. “But I don’t know yet.”
There’s also the possibility of utilizing Rangely Drug as a temporary pharmacy location, but there are licensing issues involved, Blagg said.
Blagg said Meeker Drug will be closed indefinitely, as will the drugstore in Rangely, which she also owns. Rangely Drug did not have a pharmacy, but had prescriptions couriered from Meeker.
Blagg hopes to know more about the restoration of Meeker Drug by the end of the week, or the first of next week.
“We’re waiting to hear back from the restoration company, which will include a timeframe and estimate,” Blagg said.
A computer memory chip, which includes prescription records for the past 10 years for both Meeker and Rangely customers, has been recovered.
“A lot of the (paper) records (stored in the drugstore’s basement) will be salvageable,” Blagg added.
But before restoration work begins, the drugstore will have to be cleared of all merchandise and equipment.
“A lot of this will be in the fire sale, but we have to have the store cleared out, every single thing, including the basement, in order to guarantee the smoke won’t keep coming back” Blagg said. “The carpet will be gone, because it’s holding a lot of the odor.
“They use a blasting process with a baking-soda solution,” Blagg said of the clean-up. “That helps with the odor.”
The 95-year-old building includes the original tin ceiling, which will be restored, Blagg said. Her father-in-law formerly owned the business, from 1962 to 2004.
The fire was investigated by the Colorado Bureau of Investigation.
“Both CBI and the insurance investigator seem to feel confident it was caused by an electrical shortage,” said Meeker Police Chief Bob Hervey.
On May 23, Blagg said Meeker Police Officer Jim Amick first noticed smoke coming from First National Bank of the Rockies, located next to the drugstore.
“There’s a common attic between the two buildings, and there’s no firewall,” Blagg said. “Which will be rectified when we do the restoration of the building. But that’s the reason you even saw smoke there (at the bank) in the first place, was the common attic.”
Firefighters cut two holes in the floor of the drugstore to gain access to the basement, where the fire started.
“When they cut two holes in the floor, it totally filled the inside of the store (Meeker Drug) with smoke,” Blagg said.
With Meeker Drug temporarily closed, both Pioneers Medical Center in Meeker and Rangely District Hospital are assisting people in finding alternatives for having prescriptions filled.
RDH Chief Operating Officer Nick Goshe, said, “Obviously, it’s inconvenient, but we’ve not been having any problems. There are a couple of places in Vernal (Utah) that do a one-day mail order, so we’ll fax prescriptions down there, and they send them out next day, or a lot of our patients can go down and pick it up. It’s inconvenient, but for right now that seems to be the best we can do.”
“Oh, yeah, the clinic is getting a lot of calls,” said Margie Joy, PMC spokeswoman. “So, yes, we are helping. However, we are limited. We’re not licensed to be a commercial pharmacy. But what we can do is we can refill prescriptions at any pharmacy of their choice, and they can have those within 24 to 28 hours. We can easily get people set up to fill their prescriptions at a new pharmacy.”
Additionally, Joy said, the Meeker Streaker bus is running to Craig and Rifle, so people can pick up prescriptions.
“The county owns and maintains the buses used for the Meeker Streaker, but the hospital hires the drivers, coordinates the schedules,” said County Administrator Pat Hooker. “We are looking into the possibility of extended hours, days of operation to assist residents with their needs.”
The county also owns and maintains buses for seniors in Rangely, but schedules are coordinated through the Radino Senior Center, Hooker said.

Listen to this post RANGELY — It was a little over a year ago, when John Allen and his friend Carlos Graham Sr., went hunting together. It would be the last time.

Listen to this post RANGELY — Martin Anchondo of Rangely was named to the dean’s list (3.5-3.74 grade-point average) for spring semester at Northeastern Junior College in Sterling.

Listen to this post Shae Barrow and Caleb Dodds were crowned queen and king of the 2011 junior/senior prom held last Saturday.