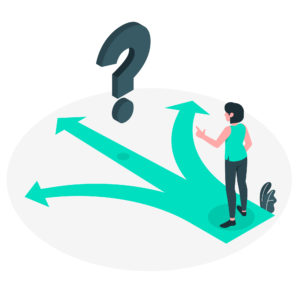 According to some sources, the average human in modern society makes approximately 35,000 decisions every day.

No matter how you slice it, that’s a lot of decisions to make in a 24-hour time span. Granted, most of those decisions are pretty automatic. We decide to brush our teeth, but we probably don’t think about it too hard.

People like Steve Jobs and Mark Zuckerberg took some of the stress out of the “what to wear today” decision by adopting a daily uniform of their choice.

Untold numbers of parents, tired of standing in front of the refrigerator every day, have adopted weekly or biweekly menu plans to take the stress out of deciding what to eat for dinner.

Those are simple ways to take back some of the time we spend every day making decisions.

Wearing a seatbelt, using sunscreen, posting something on social media, those are seemingly innocuous decisions that can have serious consequences. Hopefully we learn from those experiences and don’t make the same mistake twice when we don’t choose well.

There are some decisions, however, that can’t (and shouldn’t) be automated or preplanned, like how we should vote.

I’ve been guilty of going through a ballot and voting a single-party ticket without doing my due diligence about the individuals and their track records, their voting records, their beliefs and integrity or lack thereof. That’s lazy voting, and I’m deciding not to do that again, even though it takes time to review that blue book that comes in the mail full of legal mumbo-jumbo, and it takes time to read up on candidates and issues and the pros and cons that go with a topic. And sometimes it takes courage to vote your conscience instead of what’s popular.

This particular election cycle only has a few items on the ballot, making it a perfect opportunity to do our homework and make thoughtful decisions based on facts.

I know voting adds to that list of 35,000 decisions you have to make, but it’s a decision that really matters, particularly in local elections.

From my window… First week on the job interesting in county

Listen to this post Through my window, my first week working at the Herald Times was a most interesting time. Other than putting out my first newspaper edition in Colorado in more than 35 years, […]

Listen to this post We all do it, we’re all guilty of trying to save time. Saving time seems like a good idea, and so we’ve been told by every new time-saving gadget ever invented. […]

From My Window… Living here for a year now; potential tremendous for area

Listen to this post Saturday is my one-year anniversary in Rio Blanco County — or at least the day I started working as editor of the Herald Times. It has truly been an enjoyable, if […]