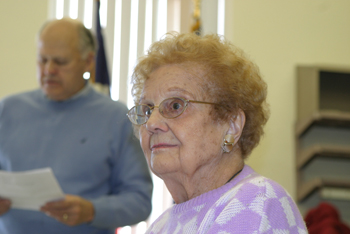 Evelyn Burner Metzger came to Meeker with her mother and two brothers and two sisters in 1919 in a covered wagon. She was 6.
Her father had been a young Spanish American War veteran who moved from Nebraska to Wyoming with his bride. He was employed at an Indian Agency near Lander. Evelyn’s mother, Effie Burner, was 11 years younger than her husband, and became widowed at age 25 when he died of pneumonia. Mrs. Burner left Wyoming by covered wagon several years later, with five children and the proceeds of the sale of her place.
Evelyn has several two memories from Wyoming. One is her father, at Christmas, watching a Santa with presents coming down a chimney at the Indian reserve. Another memory is when she and her brothers and sisters were walking south, ahead of the slow covered wagon, and were passed by more affluent folks in an early Ford. “Would you kids like some candy?” Excited one minute by the prospect, she became dejected the next when her 5-year-old brother, Roy, serious ahead of his years, denied her the candy’s sweetness, saying it could be poisoned.
Arriving in Meeker, Effie stopped at the camp ground at the 10th Street bridge and fell in love with the Valley. She visited T.B. Scott, realtor, and bought a parcel and house 15 miles out on Flag Creek.
In the following years, Effie made life work for herself and her family. Her inspiring story has been told by Evelyn’s sister Alma. The family settled into a small cabin on the old Devereaux property, two miles beyond Sam Wright’s. A buggy with fringe came with the property. Effie was told that Teddy Roosevelt had ridden in this rig some years previously.
Effie moved her family progressively closer to Meeker. For a while they lived at the Evenson Ranch on Miller Creek. Evelyn attended the Flag Creek School and started the third grade in Meeker. Her mother at this time was a cook in the Meeker Hotel.
With the sale of her Flag Creek property in 1925, Mrs. Burner purchased a Powell Park property and moved there.
One summer, Evelyn now age 10, took the motor bus to Elk Creek. There she was met on horseback by a Burro Mountain rancher, He had taken a job in the saw mill and needed someone to milk his two cows. Evelyn did this for the summer without incident.
With the family in Powell Park, Evelyn wintered in Meeker with the Lawtons of Robertson’s Drug for the ninth grade. For the next years, she wintered at Mrs. Watson’s and later at the Truett Cabins, then located at the site of the Carsten apartments on Main. Her mother could afford a car her senior year, and she lived at Powell Park.
After graduation from high school, Evelyn did work for families around town. She spent hours in the projection room of Coulter Movie Theater. She had remembered Dunham’s Hall preceding the theater there.
Karl Metzger was older than Evelyn by 15 years. He, too, was a member of a pioneer family. His enthusiasm for dancing was noticeable. He allowed Evelyn to give other boys a dance on her cards, but he always expected to be with her for the waltzes.
Winters were severe. Snow was deep and the plowed lanes were not wide. Winter travel involved miles of banks high at each side. Karl’s car was kept in Meeker. He lived on the Mesa near where Whitemans are now. He would have to walk across the Mesa to get the car, pick her up in Powell Park, go to the dance, take her home, take the car home, and then break the snow back to the Mesa.

One winter’s night they came home to Powell Park to find a large calf in the house. It had broken through the ice and had nearly died of exposure. Brought in by her brother, its presence in the house ensured its life, and the romance continued, despite Evelyn’s embarrassment.
Evelyn Metzger married Karl Metzger in 1933 in Vernal, Utah. The couple drove to California in Karl’s Pontiac. In St. George, Karl commented that a deer in front of a hotel was a very poor job of stuffing (taxidermy). Evelyn remembers that about that time “the poor excuse of an animal” decided to trot away.
They drove through a sleepy Las Vegas years before its boom. In Englewood, Calif., excited by the lights, they decided to stay. Karl could work for a local school. Returning to Meeker in 1934, Karl worked first for the WPA. They stayed with a sister for awhile before settling in near 12th and Cleveland. There they always had a big garden and an alfalfa lot. Josephine French and John Hays lived near by.
Karl began a 38-year-career as operator of the electrical generator.
For Evelyn’s mother, with her sons enlisted for World War II, ranch work proved relentless. Prior to the return of her sons, she sold to neighbor Walter Brown and purchased lots on Market Street in Meeker. Effie purchased the old Park Hotel and renamed it the Colorow Hotel. In 1970, she became a long-term-care patient at the Walbridge Wing. She passed away there in 1973 at the age of 85.

MEEKER I Registration for summer classes at Colorado Northwestern Community College’s Meeker Center started May 18 and 19. Schedules were mailed to local residents the first week of May. Upcoming classes include photography, knitting, basic […]

MEEKER I The second day back from Christmas vacation, the Meeker girls’ basketball team defeated the 3A Roaring Fork Rams at home before traveling to Walden for its first league game of the season, which […]