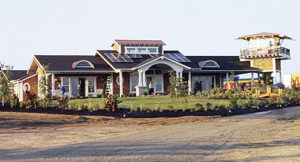 RANGELY I In today’s world, we watch reality TV shows without ever imagining those programs will land close to home. It is heartwarming when a show that does so much for so many finds its way to someone we know. Vicki McPhail of Rangely is proud to announce that her son and daughter-in-law, C.J. and Lindsay McPhail, will be the featured family on ABC-TV’s “Extreme Makeover: Home Edition” on Friday, Oct. 28.
C.J. is the son of Tony and Vicki McPhail. Tony has been in Rangely since 1956. He is the director of maintenance for CNCC. Vicki has lived in the area since 1970, when she attended CNCC and acquired her degree in dental hygiene. She was the first mail carrier on the mail route she helped establish. Tony and Vicki have been married for 38 years and have three children: C.J. of Medford, Ore., Amberlee of Trinidad, Colo.; and Dustin of Grand Junction, Colo. They also have six grandchildren.
Vicki battled cancer for eight years but is currently cancer-free and happy to be back to driving. Although she still has to be cautious, she can go out on her own. She and her husband learned C.J. and Lindsay would be featured on “Extreme Makeover” on Sept. 7. They set out for Oregon on Sept. 8. They were extremely excited about the entire experience and took part in radio interviews, pictures and were even on TV in Oregon.
When C.J. and Lindsay were first married, they made a decision to devote a great deal of their time to helping others. They started the Southern Oregon chapter of a program called “Sparrows” in their hometown of Medford, Ore. Sparrows is a non-profit organization designed to help children with medical issues. The program pairs children with a school that “adopts them as their school’s Sparrow.”
C.J. began a series of speaking engagements to educate others about the importance of Sparrow Clubs for both the students in the adopting schools as well as the “sparrows.” His messages “motivated thousands of students to raise funds, perform service work and create programs all in the name of their sparrows.”
Through their efforts, C.J. and Lindsay helped raise hundreds of thousands of dollars for the programs. The were instrumental in transforming schools and challenged students to see a world outside themselves. More importantly, they taught kids the importance of service.
They never imagined they would, themselves, need the aid of the organization they spent so much of their time building. The couple moved to Portland and started another Sparrows chapter there. Shortly after their move their oldest son, Sawyer, was diagnosed with a form of autism. Their next son, Thatcher, also displayed signs of autism. As the children’s conditions worsened, the couple moved back to Medford to be near Lindsay’s parents on their family property. This proved to be a positive move for the children’s development. Sawyer became a Sparrow, and brought awareness of the program to more than 900 students at his newly adopted school.
The move, though great for the children, put the family in a house ill-suited for their needs. The electrical system was from 1958, the plumbing leaked, there was mold in the bathrooms and the house still had the original windows. Last, but certainly not least, there was no heat to the back portion of the house. In the winter the family used space heaters, enduring poor ventilation and efficiency. Moving out of this house was not an option for the family financially, nor did they want to do that as their boys’ progress was related to their environment.
In September, the family was surprised with the news that the design team from “Extreme Makeover: Home Edition” would take seven days to build the McPhail family a brand-new home. While the work was underway, the family would be “whisked away on a dream vacation to the new Aulani Disney Resort and Spa in Hawaii.”
Design team leader Ty Pennington, designers Paul DiMeo, Paige Hemmis, Ed Sanders and new designer comedian Jeff Dye, along with local builders Ark Built Renovations and community volunteers would build the structure. In addition, acclaimed author and professor Dr. Temple Grandin, one of the most visible spokespersons for people with autism (her life story was made into an HBO movie), would be working with the design team and a volunteer from the Autism Speaks organization will help the family light the town blue to enhance autism awareness. (Information posted Oct. 10, 2011, by wdaywdaztv. areavoices.com)
The program about the McPhail family will air on ABC-TV Friday, Oct. 28. Check your cable or satellite listings for times.

RANGELY I Jeff LeBleu likes where his team is at. “We are peaking at the right time, I think,” said the Rangely wrestling coach. On the heels of winning its own tournament two weeks ago, […]