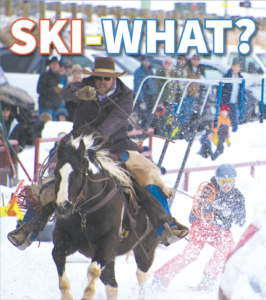 RBC I Hoofbeats, hollers and the swish of skis. They’re not sounds typically associated with each other, unless, of course, you know what skijoring is.

A relatively new sport to the U.S., skijoring pairs a skier with a horse and rider. They fly down an obstacle course that includes sharp turns, jumps and bright orange magnetic rings the skier must catch as they whiz by at double-digit speeds. The goal? Be the fastest, and don’t miss or drop those darned rings. Clean runs often end up ranked higher than fast runs as time penalties are assessed for mistakes.

With help from the Saratoga, Wyoming skijor team, about 50 volunteers and 16 primary sponsors, Meeker pulled off a successful skijoring event last weekend at the Rio Blanco County Fairgrounds. More than 300 people attended. The event was part of the Skijor USA tour. In Meeker, 32 teams, plus eight junior 12-and-under teams participated, with 10 custom buckles and prizes awarded to the winners.

“I think Meeker has caught the skijoring bug,” said organizer Kitty Clemens, who, together with Meeker Drugs owner Diana Jones, brought the event to Meeker this year. “It’s exciting to be part of a community-wide shared ambition. We are enhancing our rich ranching heritage with a new winter sport that will draw and re-draw visitors for years to come.”

Volunteer Janelle Urista described the event as, “a family fun event that brings together two worlds during a time when a lot of people get cabin fever. We had so much support from our community and our mentors from Saratoga.  We could not have pulled this off in such a short time as we did without that support. This community always steps up to make these events great.”

Local racer Suzan Pelloni, a former Olympic skiing hopeful, learned about skijoring in college and competed in a few events in Montana. “That pre-run flutter in your heart and a hometown crowd—phenomenal,” she commented.

The group hopes to start planning ahead for next year.

Listen to this post Rio Blanco economic update MEEKER | On behalf of Colorado Mesa University, the public is invited to a presentation on the Rio Blanco economy with Nathan Perry, Ph.D., associate professor of […]

Listen to this post MEEKER | What do Saint Moritz, Switzerland, Saratoga, Wyoming and Nadym, Russia have in common with Meeker, Colorado? A love of horses, lots of snow and on Feb. 22 of this […]

Listen to this post Open house and ribbon cutting MEEKER | Garrett White and Tiffany Jehorek would like to welcome you to their opening of Crystal Meadow Farms. Garrett, Tiffany, along with her father Steve, […]