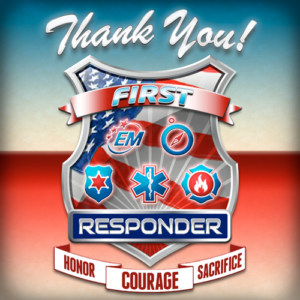 RBC | Whether you’ve had your own emergency or not, it’s not hard to understand and appreciate the difficult work that first responders do. Nationally, there are 4.6 million career and volunteer first responders. In Rio Blanco County, you likely have a neighbor, friend or family member who is a first responder. A first responder is a person with specialized training who is among the first to arrive and aid at the scene of an emergency, such as an accident, natural disaster, or terrorist attack. First responders typically include paramedics, emergency medical technicians, police officers, firefighters, rescuers, and other trained members of organizations connected with this type of work. Professional training today can take anywhere from one to three years. First responders learn life support techniques in first-response situations, including CPR, tourniquet application, and treatment of wounds. Paramedics deliver more advanced procedures and therefore require more extensive education and training.

National First Responders Day was on Monday, Oct. 28 this week, recognizing the heroic men and women who make it their business to take immediate action when disaster strikes. It’s hard to believe but we have only formally started celebrating these brave folks since 2017. Colorado made it official when they passed a bill on Sept. 27, 2017 honoring every first responder. Congress designated Oct. 28 as National First Responders Day in 2017 as well. The resolution honors the firefighters, police officers, EMTs and all those who are first on the scene in stressful situations. Notably, the family of Sean Collier, a police officer ambushed and murdered during events related to the 2013 Boston Marathon bombing, supported the resolution.

Although often rewarding, the work of first responders can come at a price. According to the Substance Abuse and Mental Health Services Administration (SAMHSA), it is estimated that 30 percent of first responders develop behavioral health conditions including depression and post traumatic stress disorder (PTSD), as compared with 20 percent in the general population. In a study about suicidality, firefighters were reported to have higher attempt and ideation rates than the general population. Recent heavy or binge alcohol drinking was reported in approximately 50 percent of male firefighters. In law enforcement, the estimates suggest between 125 and 300 police officers commit suicide every year. First responders are usually the first on the scene to face challenging, dangerous, and draining situations. They are also the first to reach out to disaster survivors and provide emotional and physical support to them. These duties, although essential to the entire community, are strenuous to first responders and with time put them at an increased risk of trauma. Both natural and technological disasters were found to be associated with increased risk of these conditions, as were factors such as resiliency, trust in self and team, duration on the disaster scene, individual coping style, and post-disaster mental health support.