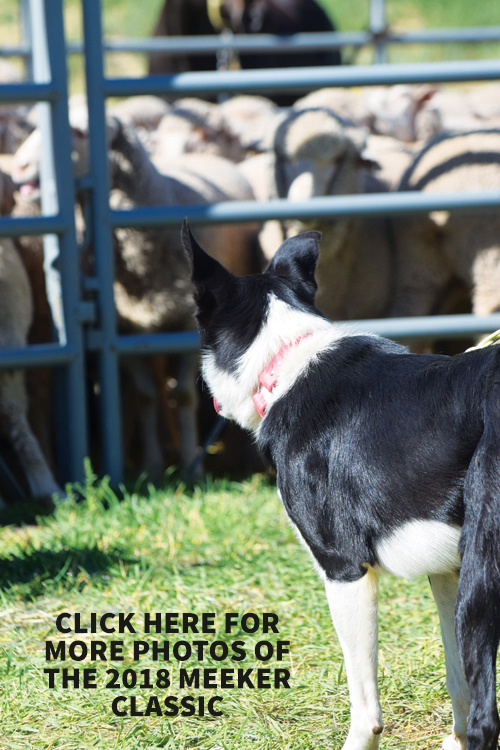 MEEKER | “From the looks of the crowds and the parking lot it was a good one for attendance,” said Meeker Classic director Maym Cunningham of the 32nd annual sheepdog trials.
Derek Fisher of New Plymouth, Idaho, and his dog Nell, age 7, was the grand champion with a score of 147. Fisher won the Classic as a 19-year-old in 2000 with Heidi, and has since earned reserve honors twice.
Bruce Fogt of Sidney, Ohio, who was a handler in the first Meeker Classic, a repeat competitor and a past champion, returned this year as a judge. Fogt said, “this was perhaps the best run” he’d seen on the course over his many years associated with the Meeker Classic.
Of Nell, Fisher said in 2016, “I’ve never had a puppy whose mind was so made up that she wanted to be mine. She would walk with me and try to stare into my eyes all the time! Half the time I was tripping over her and half the time she was running into things because she just wanted to hold my eye contact.” Fisher said Nell is the most dedicated, “one-man” dog he has ever had.
This year’s reserve champion was Barbara Ray of Millboro, Va., with her dog Maverick and a score of 133. Ray had two dogs make it to the finals this year. Her second dog, Grantham, placed seventh. Ray first competed in Meeker “when the trial was held west of its current location out toward the crossroads.”
The other finalists included third place winner Faansie Basson, a past Meeker Classic champion. Shauna Gourley, Dave Imas and Ron Burkey were all past contenders in the championship run. Cy Peterson made it into the finals on her first ever trip to Meeker. Sonia Craig has competed several years, but made it into the finals for her first time with a solid preliminary run and Maggi McClure has competed but this was her first time as well into the finals, along with Randy Dye from Canada.
Colorado artists were the top winners of the art and photography contests this year. Kathy Rippy Fleming of New Castle, Colo., won first place in the art contest with “Fields of Red, White and Blue,” an oil on canvas painting she created using only three paint colors: red, white and blue. Her creation will be the 2019 poster artwork.
Meeker’s Paul Turner was named the winner of the second annual photography contest, judged by Meeker photographer Dale Hallebach, for his black and white photo titled “Hey, Hey!”
The Rocky Mountain PBS film crew spent three full days filming around the trial and event site and downtown. The production will premiere in February. Cunningham said they’d like to do a screening in Meeker and make it a celebration of the Classic.
“Visitors to Meeker and the handlers continue to be amazed at the level of volunteerism at the Meeker Classic. It’s what they love about the event and lends to its success.”

More photos of this year’s event are on Pages 10-11A of the 9/13 edition. View a digital gallery with additional photos at https://rioblancoheraldtimes.smugmug.com/Meeker-Classic-Sheepdog-Championship-Trials-2018/

MEEKER | The Meeker Girl Scouting program is in search of volunteers. “We would love to be able to grow Girl Scouting in Meeker but need the community’s help in doing so. Girl Scouts builds […]

Getting ready for the sheepdogs …

Former Meeker Classic Sheepdog Championship Trials director Ellen Nieslanik’s dog checks out the bales of hay laying on Ute Park, where preparations are being made for the celebration and competition of the annual event’s silver […]