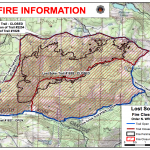 RBC I As of Wednesday morning, the Blanco Ranger District issued a temporary area closure order for the Lost Solar Fire area in the Flat Tops Wilderness.
The lightning-caused fire has grown to approximately 4,500 acres since it started Aug. 8 and is burning in mixed conifer and aspen and partially in open meadow in the Lost Solar drainage.
The fire is being managed using a “confine and contain” strategy, allowing the fire to play its natural role in the ecosystem. The safety of fire personnel, the remote location of the fire, and the steep and rocky terrain in the area were additional factors in the decision to manage the fire.
The Lost Solar drainage is home to a herd of Rocky Mountain bighorn sheep as well as a healthy population of elk and other wildlife.
Currently 35 fire personnel, including a Type 3 helicopter and crew and a wildland fire module, are monitoring the fire and area structures.
“The majority of fire activity has been to the north and east, with little activity south of Lost Solar Creek,” said Lynn Lockwood, public information officer for the Blanco Ranger District of the White River National Forest.
The storm that moved through early this week did not provide enough precipitation to slow the fire’s progress.
“The fire is still active,” Lockwood said. “This closure could go on for awhile, possibly until we get snow. We’re reevaluating it all the time.”
The entire area is now restricted, with the exception of the South Fork Trail, the Park Creek Trail and the Nichols Creek Trail.
The restricted area is defined as an area in the Flat Tops Wilderness located at T. 2S R. 90W, Sections 1,2,11-15,and 22-24; T. 2S R. 89W, all or portions of sections 2-10 and 15-21 including Trail #1828 Lost Solar Creek from its junction with trail #1827 South Fork Trail to the junction of trail #1825 Oyster Lake Trail. Also trail #1825 from the junction with trail #1828 west to the junction with #2254, Trail #2254 between its junction with trail #2253 and trail #1825. Park Creek Trail #1829 will remain open for now.
Going into or being upon the National Forest System lands within the Lost Solar Creek Fire closure area, or being on the closed portion Trails (#1828 Lost Solar Creek, #1825 Oyster Lake Trail and Fowler Bench Trail #2254) is prohibited.
Hunters or other outdoor recreationists with access questions are asked to call the Meeker office of the Blanco District at 970-878-4039. For current information, please call the fire information line at 970-456-1620.

After more than a year of planning and gathering ornaments, the 2012 Capitol Christmas Tree, harvested 40 miles east of Meeker in the White River National Forest, was delivered, decorated and lit in front of […]

MEEKER I The Middle Elk Fire on the Blanco Ranger District is located some 30 miles north of New Castle, Colo., to the west of the Buford New Castle Road at Hiner Springs. For safety […]

MEEKER I The excitement continues to build as preparations are made to cut, wrap and deliver Colorado’s gift to the nation, the 2012 Capitol Christmas Tree, and everyone in Rio Blanco County is invited to […]